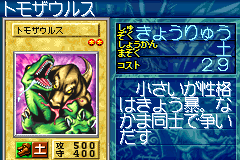 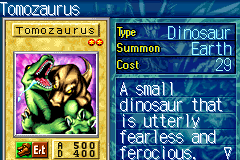 Edited artwork
#104: Curtain of the Dark Ones
#106: Spirit of the Winds
Yu-Gi-Oh! Duel Monsters 8: Reshef of Destruction cards (list · gallery)

"Tomozaurus" is included in the Initial Deck.

Two copies of "Tomozaurus" are included in the Initial Trunk.

"Tomozaurus" can be purchased in the shop.

"Tomozaurus" can be obtained via ante from the following pools. The chance of winning it is listed as a percentage and a probability out of 2048. This list might be incomplete until all opponents have been documented on this site.

The following characters use "Tomozaurus" in their Deck. This list might be incomplete until all opponents have been documented on this site.