Top of the Hexagon 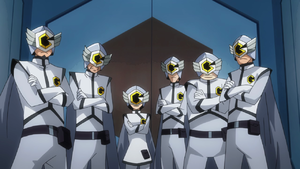 The Tops of the Hexagon, known as the Tops of Hexagon (トップ・オブ・ヘキサゴン Toppu Obu Hekisagon) in the Japanese version, were the six executives of Goha Enterprises in Yu-Gi-Oh! SEVENS, below the Goha President. They assist him in coordinating the response to the sudden installation of Rush Duels into their servers.

Mimi Imimi, as Number 6,[2] was the only named member of the Top of the Hexagon, and the only female member.

After Rush Duels were installed into the Goha Enterprises servers, the Tops of the Hexagon and the President worked to eliminate them and any mention of them, worrying about their sudden installation and their inability to locate their data in the server. The most Goha Enterprises could do was censor any digital information concerning Rush Duels, but information eventually made it into print in the form of the Goha #7 Elementary Newspaper, which identified Yuga Ohdo as their creator. The Tops convened and the President pointed out a notebook that Yuga held in an image on the newspaper's cover that claimed to hold the secrets of Rush Dueling. Mimi Imimi volunteered to go undercover at Goha #7 to obtain the notebook, but though she was successful, it did not yield immediate results, and Mimi continued to attend Goha #7, while the other Tops began to analyze Yuga's notebook.[3]

The Tops of the Hexagon defeated by Nail.

Dissatisfied with the current situation related to Rush Duels and the lack of progress made by Mimi and Nail Saionji, the Tops of the Hexagon sans Mimi herself approached the Garden of Curiosity with the intent to fire the two of them. Nail identified that their true goal in doing this was to amass more power for themselves, removing their sixth member and taking over Nail's duties within the company to move up the corporate ladder. Despite the uneven challenge, Nail agreed to leave Goha on the condition that all five of the Tops of the Hexagon defeated him in a Rush Duel simultaneously. In actuality, this was merely a ploy by Nail to allow him the opportunity to use Real-Time Duel Programming to implement his Maximum Summon rule into Rush Duels, subsequently defeating all five of them at the same time.[4] After the Duel, he took the Duel ID cards of all five, and rewrote the ID cards of Numbers 1, 2 and 4 into "Yggdrago the Sky Emperor", though the IDs of Numbers 3 and 5 rejected the rewrite.[1]

Following their loss to Nail, the five members of the Tops of the Hexagon were all demoted from their executive status. Shortly after, Mimi was also demoted for failing to keep her colleagues in check, effectively terminating the entire group.[5]

Following their demotion, several Goha executives met at the Goha Enterprises Main Office to discuss the rising popularity of Rush Duels, with one having suggested that the crisis was caused by the lack of the Tops of the Hexagon and that an election should be held immediately, though nothing came of his proposal.[6]