Toru is a character appearing in Yu-Gi-Oh! 5D's World Championship 2011: Over the Nexus.

Toru is friends with the player character and lives with them in Crash Town. He is interested in mechanics and has spent a considerable amount of time making a Duel Runner.

He forms a team with the player and Misaki during the game's fourth chapter, intending to take part in the incoming WRGP.

Toru's rewards are the same for both Ground Duels and Turbo Duels. 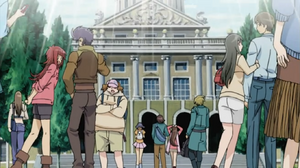 A Toru lookalike talks to a girl resembling Misaki.

At the start of Yu-Gi-Oh! 5D's episode 154154: "Shining Forth to the Future", when the scene switches to a crowd of people walking outside of the Somerset House, someone whose hairstyle resembles that of Toru is seen talking with a red-haired girl who shares Misaki's hairstyle.