Torunka is an inhabitant of the Duel Monsters Spirit World. Torunka is the spirit of Dark Sage, but after being affected by the Minus Curse, he appears as a child (teenager in the dub). In the dub he suffers from Sciatica, even in his younger form.

Torunka, along with other Spellcaster spirits, managed to escape when Zeman the Ape King captured other spirits. However, they fell victim to the Minus Curse changing them into children.

While Zeman's soldiers were invading a village, Torunka saved Luna by helping her hide. He explained the political situation of the land since Zeman's arrival to her. He recognizes Luna as a Signer after she tells him Ancient Fairy Dragon sent her to find Regulus in order to save Ancient Fairy Dragon. In the Japanese version, he uses the personal pronoun "washi" (a stereotypical old man pronoun), and he tends to call Luna "Little Miss" (Ojo-chan) as a sign of elder formality and also due to Luna's title as a Signer.

Torunka reluctantly helps her find Regulus, knowing Regulus has been acting hostile lately. Both find Regulus, and after a chase, Luna disposes of the Cursed Needle and she shows Regulus her Mark of the Dragon. 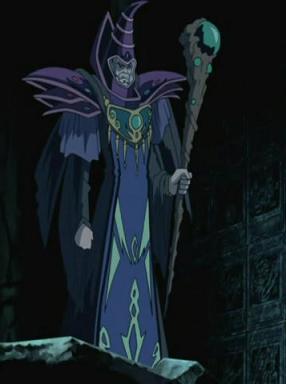 The trio set out for the castle and infiltrate it, disguised as traveling magicians who have captured Regulus. They manage to fool Zeman enough for him to start releasing the Ancient Fairy Dragon, believing he can truly cast the Minus Curse on her by resealing her with Regulus. Torunka gets excited and trips over his baggy clothing, accidentally revealing Luna's disguised Cursed Needle, and turns it, making him tell the truth when he intends to lie. Regulus locks Luna and Torunka in the cage to temporarily protect them, while he stops Zeman from resealing the Ancient Fairy Dragon.

The Minus Curse was dispelled when Regulus killed Zeman. Torunka returns to his true age, and sends Luna back to the human world after "Earthbound Immortal Cusillu" is Summoned. 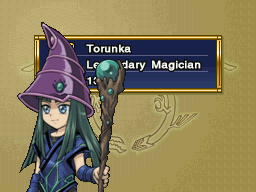 Torunka, in Over the Nexus

Torunka appears as a supporting character and opponent in Yu-Gi-Oh! 5D's World Championship 2010: Reverse of Arcadia and Yu-Gi-Oh! 5D's World Championship 2011: Over the Nexus. In both games, he is responsible for the strange phenomena that various characters notice after the end of the storylines, and defeating Torunka in duels after addressing the phenomena will allow players to change their face.