Transcend Game Part 2 is an event that occurred in Yu-Gi-Oh! Duel Links. It is the sequel to the roaming Duelist event Transcend Game, and allows the player to unlock Sera as a playable character. 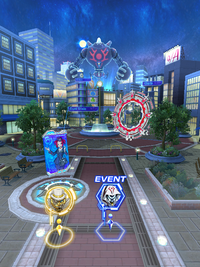 During the event, once the player logs into Duel Links for the first time since the event started (or if already logged-in, once the player enters a Duel World Area, if they weren't at one already), they will be greeted by a cutscene.

Seto Kaiba is seen admiring the current progress of Duel Links' development. He believes that, once he's finally finished it, he will finally be able to revive Atem, and become the Pharaoh himself. In another area of the digital world, the Unknown Duelist overhears Kaiba's monologue, and says that no mater what he does, he will never become Pharaoh.

Another cutscene will be played when the player Duels against Unknown Duelist for the first time using one of the following characters:

On January 9, 2020 (November 7, 2019 during the first run), a new cutscene is unlocked. It starts from the moment in which the first cutscene of the event ended, with Kaiba aiming to become Pharaoh. This time, however, the Unknown Duelist appears to Kaiba in her true form, a young girl (although Kaiba does not know about the Unknown Duelist at this time). She says she's simply one of Duel Links' playtesters, and wants to thank Kaiba for uniting the consciousness of so many Duelists in a single place. The girl then questions if Kaiba knows what would happen if a "super consciousness" enters their dimension, and proceeds to explain that it could lead them into other unknown dimensions, perhaps of peace or darkness. Furthermore, she says she's heard a voice very important to the world of Duel Links, but it comes from another dimension. Kaiba is visibly surprised, and as the girl disappears, she says maybe he can reach the voice's owner if his mind expends beyond all others.

On January 11, 2019 (November 9, 2019 during the first run), a new cutscene is unlocked. It starts from the moment in which the first cutscene of the event ended, with Sera's last words to Kaiba. Mokuba contacts Seto to alert of unusual patterns of data in Duel Links, as it appeared that the player's minds were going beyond normal levels and were reaching a new dimension. Kaiba smiles, as this is exactly what he hoped would happen, and proceeds to log in Duel Links himself. In there, he meets Unknown Duelist for the first time, who warns him that what he's doing is dangerous.

On November 14, 2019, the day after the event ended, the player will be greeted by a last cutscene. Kaiba and the Unknown Duelist are in the middle of a Duel, with Unknown Duelist seemingly having the upper hand with "Duza the Meteor Cubic Vessel" and its 8800 Pulse ATK. After taking a hit, Kaiba stands again and Summons "Blue-Eyes White Dragon", but this time with 19900 Pulse ATK. The Unknown Duelist then realizes that Kaiba's control over his own mind was so great that he managed to hide his true power until that moment. Kaiba then attacks "Duza" with "Blue-Eyes", winning the Duel. As the Unknown Duelist's avatar disappears, the same girl from before appears in its place. Kaiba states he knew she was the Unknown Duelist all along, to which she replies that she did all in her reach to try and stop him, and asks if it's too late for him to reconsider. Kaiba dismisses the idea, and then, along with his "Blue-Eyes White Dragon", he continues to ascend in the dimension, and believing that Atem was there, he warns him that he's on his way.

In the real world, Mokuba is warned that Seto's mind is reaching levels that could put his own life in risk. He then shuts down Duel Links and rescues his brother, with the latter believing that he's close to reaching the Pharaoh. Somewhere else, the girl from before seems disappointed that her plan didn't work and that Kaiba didn't destroy himself. She is then approached by an unknown boy, and the cutscene (along with the event) ends with both of them walking away.

Once the player enters Duel World (DSOD) for the first time, Unknown Duelist Level 10 will have already spawned. After defeating her, she can be Dueled against at the Gate. At first, she will only be able to be challenged at Level 10. To challenge her at higher Levels (up to Level 40), the player needs to defeat her at least once at the highest available Level (e.g. she needs to be defeated at Level 10 before she can be challenged at Level 20). In order to challenge Unknown Duelist at a certain Level, the player needs to spend a corresponding amount of Neuron Gears, which is as follows: 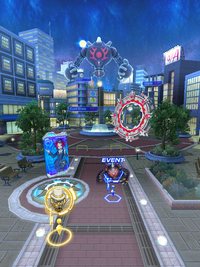 Starting on January 11, 2020 (November 9, 2019 during the first run), the player can receive bonus Neural Power boost of 30% to 100%. The chance of this bonus occurring will increase each time the player Duels in Duel World or Ranked Duels, but resets once the bonus is received. Starting on January 14, 2020 (unknown if it occurred during the first run), the amount of Neural Power obtained is doubled. 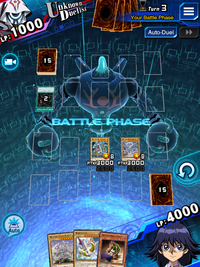 A Duel against Transcendent Unknown Duelist

When challenging Transcendent Unknown Duelist, the player can chose to Duel against her Level 20, Level 40, or (after January 11, 2020/November 9, 2019) Level 60 Decks. At first, only the Level 20 Deck is available, and the player must defeat each lower level Deck to unlock the subsequent level. Depending on her Level, the player gains additional Duel Assessment after winning against her, with her Level 20 version rewarding an extra 2000 points, Level 40 rewarding 4000, and Level 60 rewarding 6000. The event points multiplier is 20, regardless of her Level. The Transcendent Unknown Duelist is more likely to drop Rainbow Packs than normal.

After defeating Transcendent Unknown Duelist Level 20 for the first time, the player unlocks Sera as a playable character.

Duels against Unknown Duelist become Superconscious Duels, which allow both players to Normal Summon Level 5 or higher monsters without Tribute (this is not treated as a Tribute Summon).

When Dueling against Unknown Duelist Level 40 or higher, these are the only cards that can drop; at lower levels, cards from the standard pool for Legendary Duelists may also drop.

These missions were available after January 9, 2020.

These missions were available after January 11, 2020.

These missions were available after November 8, 2019.

These missions were available after November 11, 2019.