Trials of the Capsule Monsters

The Trials of the Capsule Monsters[1] are a series of five tests in the World of Capsule Monsters. Yugi Muto, Joey Wheeler, Téa Gardner, Tristan Taylor and Solomon Muto undertook the trials in an attempt to return to their home world.

Before beginning the first trial, Téa was given a pentagon-shaped amulet, divided into five sections. Each time a trial was completed, one of the sections lit up.[2]

Before the shadows blanket the land, go to the Fortress of Fear. Locate the place where the spirit sleeps, And the pathway you seek will appear. 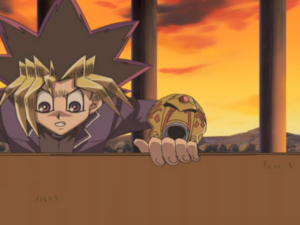 Yugi attempts to open the tomb ("the place where the spirit sleeps") before sunset ("before the shadows blanket the land").

This instruction was written in hieroglyphics in the temple where La Jinn the Mystical Genie of the Lamp resided. Solomon was able to translate the hieroglyphics and the group realized that "before the shadows blanket the land", meant that they needed to complete the task before sunset. Joey figured the fortress was the structure on the map he had found.[3]

The group went through a tunnel, which brought them from the temple to the graveyard. After fighting off a mass of The Wandering Doomed and Wood Remains, they made their way to the Fortress of Fear.[3]

At the Fortress of Fear, they learned that they needed to copied the poses of the statues surrounding it to enter. Yugi went inside while Solomon, Joey, Téa and Tristan mimicked The Rock Spirit, Garuda the Wind Spirit, Spirit of Flames and Aqua Spirit statues. Yugi rushed to the coffin in the fortress, which he identified as the "place where the spirit sleeps". His haste caused him to fall through a trap, which left him in a room with the walls closing in. He was rescued after Yami Yugi freed Dark Magician from his capsule. Despite needing to get to the coffin by sunset, which drew close, the Yugis took time to get Dark Magician to rescue their friends from the statues, which had come to life.[3]

Yugi managed to open the coffin just before sunset. In doing so, he was endowed with the Duel Armor and more hieroglyphics appeared. Solomon translated them and learned that they would need to pass five trials.[3]

Silence the whisper that rides in the desert wind. 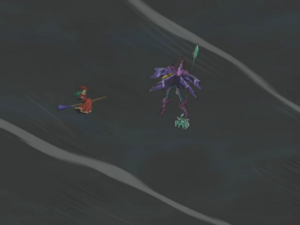 Yami Yugi faces Mystical Sand ("the whisper that rides the desert wind"), in an effort to silence her.

A previous visitor to the World of Capsule Monsters figured that the answer to completing the trial "lies in the eye of the storm".[2]

Yugi and his friends were told of this trial when they found a group of people living in the desert. They were taunted by the voice of Mystical Sand, who attacked them with a group of Medusa Worms. The group fought back, but Yugi and Yami figured that the worms were just a distraction and they needed to focus on finding the voice.[2]

Dark Magician carried Yami above the sandstorm when protecting him from a Medusa Worm and directed his attention to a twister, the source of the sandstorm. Yami attempted to make his way towards the tornado to get to the voice. On the advice of apparition of a masked man, Yami fused his Duel Armor with Dark Magician. Mystical Sand then called forward a number of Medusa Worm to block his entry to the eye of the storm, but Yami, in the Dark Magician armor, quickly defeated them.[2]

Mystical Sand came face-to-face with Yami Yugi when he entered the tornado. She created some demons from sand to attack him, but he easily defeated them. She also caused the sand to form a giant hand, which grabbed onto him, but he broke free. Finally Yami flew up close to her, attacked and destroyed her, hence silencing her and completing the trial.[2]

Trial 2: The Trial of Light and Shadows[edit]

Once a day, the unbreakable stone appears in the Valley of Light. To achieve the impossible, fight with a power that's greater than physical might.

When light is extinguished, the true test begins for a creature of darkness it brings. But only the righteous and peaceful shall pass and receive the endowment of wings.

Yugi was exhausted from the previous trial and needed to rest, when his friends began this one. A scroll with the hieroglyphics for the second stage's clue appeared just outside the cave. Solomon Muto translated it, but unknowingly only translated half of it. When viewed in light, only the "light" half of the clue is visible. The glyphs for the unseen "shadows" half only appear when the scroll is looked at in darkness.[4] 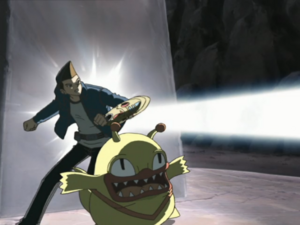 Tristan tries to "achieve the impossible" by breaking the "unbreakable stone".

Joey, Tristan and Solomon went to a nearby valley, while Téa watched over Yugi. The valley was dark, despite the riddle saying "Valley of Light", leading them to wonder if they had come to the wrong place. However the sunlight soon entered the valley, lighting it up temporarily, which Solomon realized was what the riddle meant by "once a day".[4]

The trio found a stone, which they figured was the "unbreakable stone" and suspected that they would need to break it to pass the trial. Their attempts proved unsuccessful and they were soon approached by Prisman. Joey got Flame Swordsman and Thunder Kid to attack him. Joey even landed a punch on him. As he and Tristan bickered over who should finish him off, Prisman took in sunlight and launched a powerful blast at them. As the group took cover from further attacks, Tristan came up with the idea to stand in front of the "unbreakable stone" and taunt Prisman. As he attacked, Tristan would jump aside, causing his blasts to crack the tablet. After Prisman had done enough damage, Tristan got Joey to distract Prisman, while Thunder Kid attacked the damaged stone, destroying it.[4] 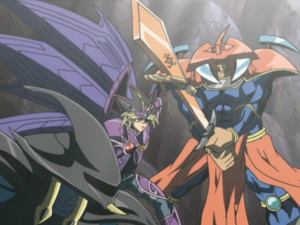 Yami shows that they are peaceful, by not attacking Skull Guardian, the "creature of darkness".

Using a fragment of the broken stone as a shield, Joey and Tristan charged towards Prisman. Flame Swordsman then jumped up from behind the stone to attack Prisman, destroying him.[4]

Yugi woke up at some point during the battle and switched to Yami, who read the scroll and realized that half the riddle was missing. When Téa talked about wanting shade, he realized that they needed to be in darkness to read the other half.[4]

With Prisman defeated, Skull Guardian emerged from a piece of the broken stone. Flame Swordsman and Thunder Kid were unable to harm Skull Guardian and the group began to run. Yami Yugi then arrived and fused with Dark Magician. He subdued Skull Guardian, causing a treasure chest to appear where the unbreakable stone had stood. Joey ordered Flame Swordsman to finish Skull Guardian, but Yami stopped him and explained that they needed to be peaceful, per the second half of the riddle.[4]

The chest contained wings, which Yugi and his friends could attach to their arms, allowing them to fly towards the door to the next trial.[4]

To gain the prize that thy desire, locate the peak that spits fire. The Blade of Chaos thou must release to bring about a lasting peace. 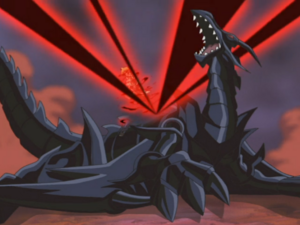 Joey "releases" the "Blade of Chaos" to stop it possessing Red-Eyes B. Dragon and "bring about a lasting peace".

Joey ran ahead of the group to try and find the clue for this trial. This led to him becoming possessed and fused with Red-Eyes B. Dragon, which he wore as armor.[5]

Téa spotted the scroll with the clue for the trial and summoned Dark Witch to fly across a stream of lava to retrieve it. Solomon translated the clue and Yugi immediately identified the volcano as the "peak that spits fire". They began to climb the volcano, but later decided to use their Capsule Monsters to fly there quicker. They spotted a sword stuck into the volcano and assumed it to be the Blade of Chaos. However the sword began to shrink and their efforts to release it were thwarted as they were attacked by the now-possessed Joey.[5]

Yami, while fused with Dark Magician, fought with Joey, but was uncomfortable in harming his friend. A clash of attacks led to a moment, where Joey was able to communicate with Yugi. Joey informed Yugi that Red-Eyes had been infected and he was now controlled by the armor. He insisted that Yugi destroy the source of the infection, even though it could harm him. Téa and Tristan prepared to fight with their Capsule Monsters, but Téa could not bring herself to declare an attack on Joey. Yami insisted on being the one to do it and used a "Dark Magic" attack, while Joey mustered enough self control to prevent himself from defending. The attack separated Joey and Red-Eyes B. Dragon, both of whom remained alive. Red-Eyes attacked Yami, who reflected the attack with "Magic Cylinder", subduing Red-Eyes.[5]

The time spent fighting with Joey allowed the sword to sink completely into the volcano. However Joey figured it was a decoy and pulled the real Blade of Chaos out of the weakened Red-Eyes' body, freeing it from its possession. To complete the trial, Yami destroyed the blade, preventing it from possessing anyone, therefore fulfilling the "bring about a lasting peace".[5]

Choose the apple that gives you a raise. Then offer it up in the secret maze.