"Trickstar" is an archetype of LIGHT Fairy monsters used by Skye Zaizen in the Yu-Gi-Oh! VRAINS anime, which debuted in Code of the Duelist.

Blue Angel with "Trickstar Holly Angel", "Lilybell" and "Lycoris in the anime.

The "Trickstar" monsters are based on Japanese idols. All of the members shown so far are females dressing in colorful attires with a few pairs of insect-like wings, glassy eyes, a tattoo of varying shape on their faces, headphones over their ears, and holding an unique object in their respective artworks. Their skirt designs, and sometimes their hairdos, resemble the petal of each flowers they're named after. The Main Deck monsters have an appearance of teenage girls, while the Link Monsters appear as young women. 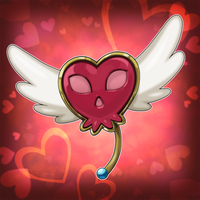 A "Trickstar Token", which is a winged version of the "Trickstar" crest.

The archetype's crest is a red stylized heart, with four protusions on the bottom and three pinkish spots in the middle that make it resemble a skull, likely referencing the burn playstyle and the toxic plant theme (see below). Every member has the crest pinned somewhere on their outfit, most usually on the collar. It also features heavily in many of their Spell/Trap Cards.

The monster "Dark Angel", although not being an official member of this archetype, has a similar design to the rest of the "Trickstar" monsters and was also used by Skye in the anime once.

Trickstar is a portmanteau of the words "Trick" and "Star" while also playing on the word "Trickster". The members of this archetype are named after various flowers, nearly always poisonous or toxic ones.[1][2] In addition, most of the Link Monsters also reference religious motifs.

The primary strategy of a "Trickstar" Deck is dealing small amounts of effect damage, usually 200 damage. In the case of the Main Deck cards, this effect is triggered according to the opponent's actions, as follows:

This archetype's secondary strategy is to disrupt your opponent's plays to prevent them from mounting a comeback. "Light Stage" can lock down their Set Spells and Traps for a turn before forcing a "use it or lose it" scenario. "Trickstar Reincarnation" banishes the opponent's entire hand and lets them draw an equal number of new cards for them (which can also deal significant burn damage off of the effect of "Lycoris"), eliminating the benefit of search cards and cards that activate in the Graveyard. "Holly Angel" prevents "Trickstar" monsters in her Link Points from being destroyed. "Lycoris" can return "Trickstar" monsters from the field to the hand to avoid other removal effects.