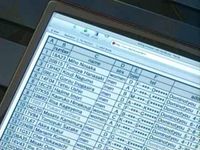 Trueman's victims include a large number of people that Trueman sent to the World of Darkness.

By manifesting through the cards of duelists who have felt negative emotions and assuming their form, but not before getting rid of the original. When he does this, everybody who knew the individual forgets they ever existed.

At Duel Academy while looking at a list of all the students, Alexis, Chazz and Syrus thought that there were more students once at the academy but that they can't remember any of the people they had Dueled that day. Atticus, who was also present, did not remember there being anymore than those listed.

While in Domino City, Axel Brodie discovered a list of names on a computer screen inside a van. The names on the list began to disappear one by one as Trueman captured them. Axel then dashed from the van and went to KaibaCorp.

Here he found a list of people employed by KaibaCorp. Names on that list began to disappear with Seto Kaiba's name being the only one to remain, possibly because he wasn't in the city. Later Trueman's master, Nightshroud, revealed that it had created an artificial solar eclipse over the planet, with its own dark world blocking out the sun, which assimilated all humans on Earth, likely including Seto Kaiba, into the World of Darkness.

This left Jaden, Pharaoh, and the immaterial Lyman Banner, as the last known denizens on Earth. It can be assumed everyone in Domino City and the world were released from the World of Darkness after Jaden defeated Nightshroud.

Names from the lists include[edit]