Yellow Gate Keys are required to Duel Tyranno Hassleberry at the Gate.

He appears in-game after the player reaches Stage 6 of Duel World (GX), at which point his Character Unlock Missions become available. Prior to July 22, 2019, he could only be unlocked in the special event I've Got Dino DNA! Tyranno Hassleberry's Ultimate Evolution. Prior to being made available as a playable character, he had also appeared during a special event as a roaming opponent.

Under the tutelage of Sergeant Jaden, Ra Yellow's dinosaur Duelist adores his prehistoric pals. After a serious accident nearly broke his leg in two, they used a dinosaur bone to save it. Now infused with dino DNA, no Duelist can stop him when he unleashes his primeval powers!

When Dueling against Level 40 Hassleberry, these are the only cards that can drop; at lower levels, cards from the standard pool for Legendary Duelists may also drop.

"Survival of the Fittest", "Jurrac Spinos", and "Jurrac Protops" were not immediately available when Hassleberry was added to the Gate, and were added later on an unknown date. 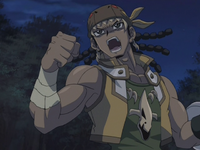 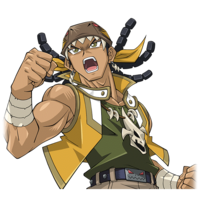