U2 was Yugi Mutou's Digital Pet in the Yu-Gi-Oh! manga. It takes after him in appearance.

U2 is named after the first syllable in Yugi's name. 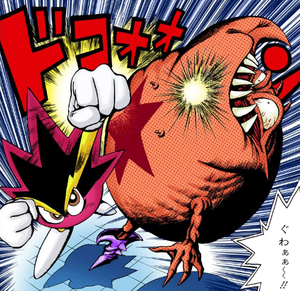 Kujirada linked his his Digital Pet, with other, allowing it to eat them. Its victims included Jonouchi's pet and Anzu Mazaki's pet, Peachy. He later tried to let it eat U2, but U2 was able to change into a more powerful form, similar to how Yugi can change into Dark Yugi. This was due to the exchange of data it got from when it interacted with Jonouchi's pet, and how a person's virtual pet is supposed to represent its owner. U2 then beat up Devil Master.

Since Digital Pets usually only live 21 days, Yugi says his goodbyes to U2 the night before he would perish, staying up all night to watch him until morning.