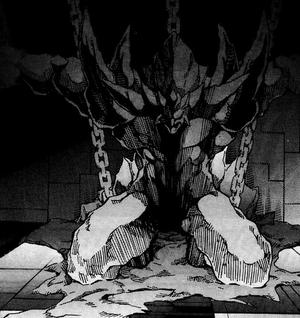 The Ultimate God (究極神, Kyūkyoku-shin) is a being in the Yu-Gi-Oh! 5D's manga. Roman and Rex Goodwin's true plans involve resurrecting and controlling this being.[1]

The Ultimate God is located at the bottom of the Aerial Fortress Seibal, and is sleeping since ancient times. In the past, rituals were conducted between Duel Priests, in order to combat and seal this being, who people feared. It is said that should a Duel Priestess lose the ritual Duel, the Ultimate God shall awaken.[2] It also appears that in order to keep this God sealed, not only the Duel Priestess must win, but she should also be offered as a sacrifice for the God.[3]

In the thirtieth century B.C., Rex and Roman became Duel Priests and conducted the Festival of Duality attempting to revive this God who was said to be able to realize any wish - they wanted to revive Ish Kiq Goodwin, the previous Duel Priestess who was sacrificed for the ritual. For that purpose, they convinced the Duel Priestess from that time to lose on purpose, which caused the sun to hide and a disaster to happen, killing many people. Rex and Roman then headed towards the Aerial Fortress Seibal in order to reach the God; however, Rex was completely dominated by its colossal dark miasma, causing him to go crazy.[2][3] 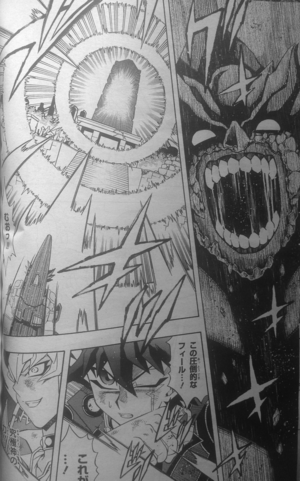 In the present, Rex and Roman use Sect Ijuin and Akiza Izinski as the Duel Priests to conduct the Ritual Duel once more in an attempt to revive the Ultimate God. For that purpose, Goodwin always planned on Akiza's defeat.[2]

Finally, Yusei becomes the King of Sky's Lock, and Duels against Sect. Meanwhile, the defeated Duel Priestess, Akiza, is offered as a sacrifice, with the Ultimate God slowly draining her life. In the beginning of the final ritual Duel, the Ultimate God starts its resurrection, and produces a roar which thrills Yusei and Jack due to its power.[6] 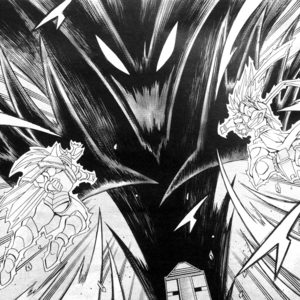 The God's miasma as Yusei's and Sect's monsters prepare to deliver the final blow.

When Rex Goodwin summons "Ultimate God Ultimaya Tzolk'in" in his Duel with Yusei, the Ultimate God awakens and breaks free from his seal. Then it transforms into its true form: a gigantic red dragon while being under Goodwin's control.[9] Yusei is able to destroy "Ultimaya Tzolk'in" by combining the six Duel Dragons of the Priests of Light into "Divine Spark Dragon Stardust Sifr", but the Ultimate God possesses Goodwin's body and continues the Duel, Summoning "Ultimate Phantasm God Ultimitl Bishbaalkin" and merging with it, destroying "Stardust Sifr" and devastating the field, while unleashing "Uchatsuimiime Tokens" on both the field and the Duelists below that took control of them.[10] Yusei was eventually able to destroy the Tokens and thus reduce the ATK of "Ultimitl Bishbaalkin" low enough for "Stardust Spark Dragon" to destroy.[11] Although the Ultimate God prevented its own destruction, its ATK had still been lowered enough for "Stardust" to deplete its LP. It couldn't believe that humans had defeated it again, but warned Yusei that it would revive once again as long as humanity sought power, claiming to be the darkness itself.[12]