From Yugipedia
(Redirected from Umbra & Lumis)
Jump to: navigation, search

Lumis and Umbra are tag-team members of Marik Ishtar's Rare Hunter organization. They pride themselves on being an unbeatable tag team.

In the anime, they have receivers attached to their masks, so they can secretly communicate their strategies with one another. This was not shown in the manga. 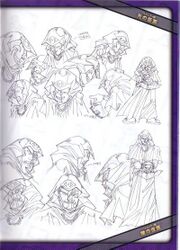 After Marik's goons successfully capture Joey, Mokuba, and Téa (in the manga, the Mask of Light used a Duelist Chastity Belt to lock Kaiba's Duel Disk, with the key to it being the hostage), both duelists (now wearing their half-masks) challenge Seto Kaiba and Yugi Muto to a Tag-Team Duel at the rooftop of a skyscraper. In this duel, the glass panels that they are standing on each have a Shadow Box attached to them. As soon as a player's Life Points drop to 0, the Shadow Box will go off sending the loser falling and trapping them in the Shadow Realm before the fall (for the Japanese version, the Shadow Boxes were bombs that would detonate, sending the loser to fall through a 130-foot building to his death).

Despite the advantages Lumis and Umbra had, after a slip up made by Lumis, and with some provoking from Kaiba, the masked duo's teamwork faltered, which led to their eventual defeat. Seto Kaiba managed to use "Soul Exchange" to summon Obelisk the Tormentor and used it to defeat Umbra, sending him down the window pane, however Umbra had a parachute that he used to escape safely. Lumis surrenders and Marik uses him to communicate with Yugi, presumably rendering him comatose with his Millennium Rod afterwords.

In the English dub of the anime, Lumis and Umbra claim to be Rare Hunter 2 and Rare Hunter 3.