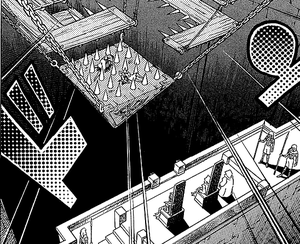 The arena in the underground prison wing

The underground prison is an oubliette in the Yu-Gi-Oh! manga and anime, below the pharaoh's palace.

One of the chambers has a bottomless pit in the center of the room. Above the pit was an inverted pyramid and a series of wooden platforms, all suspended from the ceiling by chains. The base of the pyramid and edges of the platforms were all lined with spikes. This arrangement served as an arena, where prisoners were forced to battle. The edge of the pit had a stand with two chairs for spectators. One of the walls in the chamber is equipped with various torture tools.

The underground prison wing was closed in Akhenamkhanen's reign as pharaoh. His successor, Atem, was unaware of its existence.[1]

Seto had the wing reopened for the prisoners of the ka hunt, without Atem's knowledge.[2] It took Gebelk some time finding the keys to its torture chambers, having not used them in a long time.[1]

Gebelk researched the best way to strengthen the prisoners' monster ka of the prisoners and found that invoking their desire to live made their ka drastically stronger. So he used the arena in the prison to force them to fight to the death.[1] .