This unnamed individual claims to be from the organization, Iliaster. 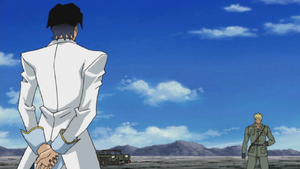 The man from Iliaster approaches Roman in the Nazca Desert.

This mysterious person approaches Roman Goodwin 17 years prior to the start of the series in the Nazca Desert, mentioning how its too bad the Momentum research was shut down, saying how he knew Roman wanted to continue it. He believed that it should continue, even if it means getting rid of Dr. Fudo. Believing the Momentum to have unlimited potential, he states Iliaster believes Roman is a true genius who will rewrite history, calling him the chosen one as reflected by the mark on his left arm. Before dissapearing in the middle of a sandstorm, he tells Roman he must look into the will of Momentum's light with his own eyes. Due to his actions, he is indirectly responsible for the Zero Reverse. Though he never shows up again in the series, his dialogue about "rewriting history" and Momentum implies he's affiliated with the Three Pure Nobles, which is later confirmed by Jakob as he tells Yusei Fudo that they manipulated Roman to cause the Zero Reverse.