Ushio is a hall monitor and trainer of the disciplinary group, who enforced many rules and was feared by many. He beat up Katsuya Jonouchi and Hiroto Honda, under the rationalization that he was protecting Yugi Mutou and insisted that Yugi pay him bodyguard fees.[1]

He overheard Katsuya Jonouchi and Hiroto Honda talking and asked them what they said about bullying. Jonouchi prepared to tell Ushio off, but Honda quickly restrained him to prevent trouble and insisted everything was fine until Ushio left.[1]

While Ushio was training the disciplinary group, he saw Yugi Mutou walk past and asked him if he was being bullied by people in his class. Yugi replied that he did not think so. Ushio said that just because he is a nice person he does not have to answer like that and appointed himself Yugi's bodyguard, telling him that he need not worry. Yugi insisted that that was not necessary and he left.[1] 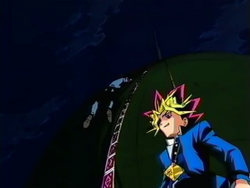 The next day at school, Ushio proceeded to beat up Jonouchi and Honda and took Yugi to see them. Yugi was mortified and tried to explain that he didn't want this. Ushio continued to attack Jonouchi, but Yugi protested, saying he wouldn't let Ushio do this to his friends. Ushio joked about Yugi calling them his friends and imposed a bodyguard fee of ¥200,000.[1]

Later that day, Ushio bumped into Yugi at school after hours. He realized that Yugi didn't have the money and decided to punish him. Honda and Jonouchi saw Ushio attacking Yugi and try to fight him off, but got beaten up themselves. While they lay beaten, Jonouchi handed Yugi the piece of the Millennium Puzzle he had taken earlier.[1]

Yugi was able to finish the Millennium Puzzle and became possessed by Dark Yugi, who challenged Ushio to a Shadow Game. The game involves scaling the building and trying to draw the playing card with the higher number. Ushio lost after he tried to cheat Dark Yugi placed a Penalty Game on him, causing him to imagine that there were monsters coming out of a body of water about to eat him.[1]

The next day, he was seen trembling and crying in front of the school, which resulted in him being taken to the hospital.[1]