V.S.S.L., short for Virtual Solid Sense Laboratory, known as V.S.F.L. or Virtual Solid Feel Lab (バーチャル・ソリッド・フィール・ラボ Bācharu Soriddo Fīru Rabo) in the Japanese version, is a Facility owned by Rex Goodwin in the Yu-Gi-Oh! 5D's manga, which holds underage prisoners. There, Rex, Lazar and Zigzix performed experiments to test the children in order to secretly create a Solid Vision system which could hold the power of a Duel Dragon. The children were constantly monitored by several cameras spread in the experiment rooms and in their rooms.

Jack Atlas and Kalin Kessler were once prisoners at this Facility. 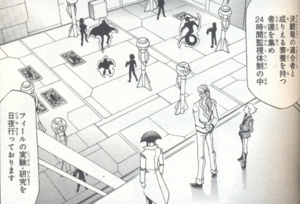 During one night, Kalin decided to Duel Jack as the two acted completely different to their opponents; Kalin treated them with respect while Jack taunted them for losing. Before the Duel began, Kalin mentions to Jack that whoever wins this Duel will get to leave the Facility and be adopted by Rex Goodwin as his son. Jack doesn't care about being Goodwin's kid and is far more interested in the Duel Dragon card that the Duelist will get for winning. During the Duel, Kalin decided to let Jack win as Kalin didn't want to leave behind the friends he made at the Facility. Jack won the Duel and as a reward, Rex gave him the "Jeweled Red Dragon Archfiend" card. Sometime after Jack left, Kalin overhears a conversation between Goodwin, Lazar and Zigzix. In the conversation, Kalin finds out that Goodwin considers the kids nothing more than guinea pigs and doesn't care if they die during the experiments he has planned for them. Kalin refuses to let Goodwin get away with what he has done and wreaks his plans. After causing an explosion in the facility, Kalin rescues the children and gets them to safety. Afterwards he steals Jack's Duel Dragon card in order to protect him. However Jack believed that Kalin simply stole the card out of jealousy. It wasn't until he defeated Kalin in their second Duel and saw through his memories that he found out the truth. Jack and Kailn later met at the building's ruins for their Turbo Duel during the D1GP.[1]