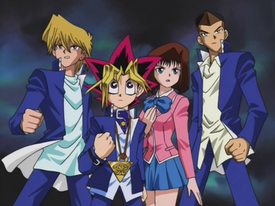 "voice" is the first Japanese opening theme of the Yu-Gi-Oh! Duel Monsters anime, performed by Japanese band CLOUD. It debuted on April 18, 2000, and aired during episodes 1 to 48. It was replaced by "S H U F F L E" in episode 49. 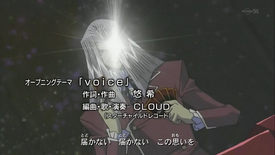 Yu-Gi-Oh! Duel Monsters 20th Remaster features an edited version of this opening. Like the series itself, the footage in the opening has been cropped to accommodate the HD resolution.

I want to send you my feelings, but they can't reach you
My passion for you remains futile

I didn't finish reading a page of the magazine
It gets to me that I have to read it
The number of channels on the TV increases
Will I fall behind if I don't watch them all?

I'm having a weird dream, where, at the park in front of my house
The ball that I threw at you falls down midway

Games are gathered in a corner of my room
Do they have no point if I don't play them?

Somehow, it feels like I'm being controlled by someone else
My heart really belongs to me

I can't hear your voice, nor can it reach me; it gets blocked by the traffic and vanishes