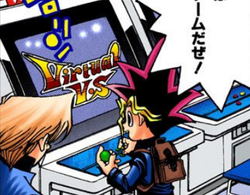 Virtual VS is a fighting arcade game in the Yu-Gi-Oh! manga.[1]

Players can face the CPU or challengers from within the same arcade. They choose from a list of fighters, including Bruce Ryu. They win by KO'ing their opponent or having more hit points when the 30 second timer runs out. One of the techniques the characters can use is called the "One-Inch Punch".[1]

Yugi played this when he and Jonouchi visited the arcade. Yugi was repeatedly challenged by Street Fighter. Yugi was unaware of who was challenging him. Both of them used the character, Bruce Ryu and Yugi kept winning. Street Fighter became frustrated and approached Yugi while Jonouchi was getting drinks. He proceeded to beat him-up and take his Millennium Puzzle as a prize. Jonouchi later tracked down Street Fighter and beat him in a fight, reclaiming the Puzzle for Yugi.[1]