West, like his sister Nico, is one of the many residents from Crash Town, later called Satisfaction Town. 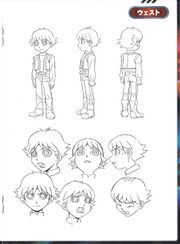 West is supportive to Kalin Kessler, as shown during Kalin's Duels. West also is aware that Kalin was once the leader of The Enforcers. He hopes to someday be as strong a Duelist as Kalin, so that he can free his enslaved father from the Dyne mine in Crash Town.

After Yusei Fudo, Kalin and Radley are sent to the mines, West and his sister, Nico, take Yusei's Duel Runner out of the town. Later they meet up with Kalin and Yusei, as they have managed to escape from the the excavation site. As Kalin asks them about Yusei´s Duel Runner, Nico tells him that they can use it to get out of town. Then West notices a pendant Yusei has, which belongs to their father.

Furthemore, Lawton comes looking for the missing Duel Runner, Yusei then detains him while West, Nico and Kalin escape. The 3 of them while trying to escape 2 other members, end up returning to the excavation site.

In there, the children find their father, Sergio, and they try to escape from the mountain together. However in order to escape, Sergio ends up sacrificing himself, requesting Kalin to look out after his kids.

After this, West, Nico and Kalin end up meeting with Lawton and Yusei. As their Duel ends up being cancelled, after Lawton uses some dynamite which ultimately sends them all flying outside the mountain. The blast makes West and Nico pass out on the ground, while Yusei and Kalin are sent down a cliff. Lawton then takes the kids back to town as prisoners.

Back in town, West and Nico are tied to a post, witnessing Barbara and Lawton's deeds. They are surprised as much as everyone else when both Kalin and Yusei come back to stop Lawton. While West and Nico tell them to run away, Kalin tells them that he has come back to save and protect them. 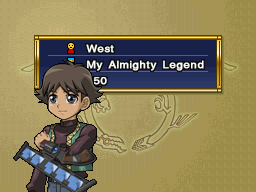 West, in Over the Nexus

West appears in Yu-Gi-Oh! 5D's World Championship 2011: Over the Nexus as a friend of the player and Toru. After finishing the main storyline, he can be faced in Tag Duels, partnered with Nico, and is a possible partner for the player.