From Yugipedia
Jump to: navigation, search
This article is about the monkey. For the human, see Joey Wheeler. For other uses, see Wheeler (disambiguation).

Wheeler, known in Japan as SAL (Super Animal Learning), is an experimental monkey from the Yu-Gi-Oh! GX anime that has the ability to Duel.

Wheeler escapes the facility in which he's being held and takes Jasmine as a hostage.

Jaden Duels for Jasmine's freedom and wins, only to realize that Wheeler will have to go back to the laboratory from which he escaped.

With some help from Professor Banner, Wheeler is set free to live in the wild with the rest of his kind. In the second season of Yu-Gi-Oh! GX, Wheeler appears while Jaden was lost and disoriented from hunger in the forest, with Jaden believing Wheeler to be past opponents of his. After giving Jaden some bananas (and water when he begins to choke), Wheeler attempts to point him in the right direction to Duel Academy. However, Jaden misinterprets him and heads in the opposite direction. 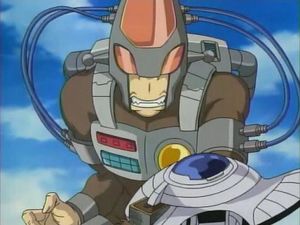 Wheeler in his experimental outfit

In the English dub, Wheeler is probably named after Joey Wheeler, who Seto Kaiba titles "a Dueling monkey" during the anime. In the Japanese version, his name is pronounced "Saru," the Japanese word for "monkey".

The lab where Wheeler was wrought was apparently abandoned at some point between seasons 1 and 3. During Season 3, Thelonious Viper begins using the lab as a base of operations to monitor Survival Duels.

Wheeler uses a Beast-Type Monkey Deck, which includes cards such as "Acrobat Monkey" and "Berserk Gorilla". He also uses the Trap Card "DNA Surgery", to turn all face-up monsters on the field into Beast-Types.