Winged Kuriboh (ハネクリボー Hane Kuribō), otherwise known as the White Feathered Spirit, is a character in the Yu-Gi-Oh! GX manga.

The White Feathered Spirit was a ka in Ancient Egypt, who aided the High Priests in conducting the Weighing of the Heart. Millennia later, its spirit was infused in the "Winged Kuriboh" Duel Monsters card, where it served as a Spirit Partner to Koyo Hibiki and later Jaden Yuki. 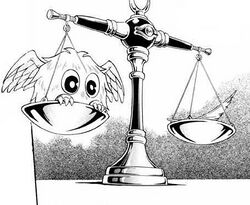 The White Feathered Spirit in the Weighing of the Heart

Koyo told Jaden that "Winged Kuriboh" was his favorite card, which Jaden found odd, as he considered it to be a weak card. Koyo told him about the spirit dwelling in the card, but Jaden did not believe him. The spirit of Winged Kuriboh watched, invisible to Jaden, watched this conversation and got annoyed by Jaden's skepticism.[1]

When Koyo met Chazz Princeton, Winged Kuriboh took an interest in Chazz's card, "Light and Darkness Dragon". It passed the Feather of Ma'at into the card, causing a spirit to dwell inside. Koyo tried asking what Winged Kuriboh had done, but was interrupted by Midori Hibiki, who could not see Winged Kuriboh and thought he was talking to himself.[1]

Koyo used "Winged Kuriboh" in a Duel against Jaden, after which he announced he was retiring from Dueling and passed his Deck on to Jaden, including "Winged Kuriboh".[2][3]

When Jaden met Chazz Princeton at Duel Academy, he mentioned how he would like to battle Chazz's "Light and Darkness Dragon" with his "Winged Kuriboh". Chazz was disgusted that Jaden considered the two cards to be equal. However when Jaden told him off and said that Winged Kuriboh was his Spirit Partner, Chazz got a shock when he saw Winged Kuriboh's spirit appear.[4]

Chazz arranged a battle with Jaden to see if he could win without using his spirit partner, Light and Darkness Dragon, while Jaden used his, Winged Kuriboh.[4] During the Duel, Jaden Summoned "Winged Kuriboh", which Chazz proceeded to mock. However Jaden transformed it into "Winged Kuriboh LV10", which he used to win the Duel.[5]

Jaden worried about losing Winged Kuriboh, when he needed to win a Duel to avoid having his Deck confiscated.[6]