The World Racing Grand Prix, known as the World Riding Duel Grand Prix in the Japanese version, or initialed WRGP in both versions, is a prestigious tournament held on New Domino City within the series Yu-Gi-Oh! 5D's to celebrate the unification of the Satellite Sector with New Domino City, the tournament has participants from all over the world competing to be the champion.

Unlike standard tournaments though, competitors enter in teams of three and compete one at a time under special rules. However, underneath the tournament's prestigious and slogan of international unity, Iliaster is using the WRGP to fuel their plans to complete the Grand Design, an action that once completed will destroy New Domino City and alter the future of humanity by summoning the Divine Temple. 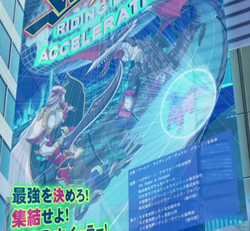 A poster featured in episode 98 reveals that the tournament was sponsored by several corporations featured in previous Yu-Gi-Oh! series, as well as implying that by this time, Pegasus had passed away.

The listed sponsors were as follows:

In accordance with the WRGP Turbo Duels: rather than being a 1-on-1 Duel, it will be conducted through groups and each teams shares a pool of Life Points in each Duel, equal to 4000 times the number of Duelists on their team.

The Graveyard does not move with the other cards.

While a team changes their current player, The other team's Speed Counters increase by 1 for each lap their current active Duelist completes during the time it takes for the next Duelist to come out. If their Speed Counters reach 12, the maximum, each lap takes away 1 Speed Counter from the other team until it hits 0, which means they lose. This rule only occured in the Memorial Circuit, since the Turbo Duel tracks used for the rest of the competence were too long for a Duelist to complete more than 1 lap before the other team switches players.

The matches are Survival Duels, so the winner of each Duel must continue against the next opponent with the same stats he/she finished the last Duel (field, Life Points, hand, removed from play cards, and Graveyard.)

If a Duelist enters the pits (for any reason) by notice of their team, they lose all Speed Counters but do not lose the Duel or the Match; whether or not the remaining person gains Speed Counters per lap in this case is unknown and unconfirmed as of now.

If a team decides to switch to the next member while the other team is switching, they continue with the accumulated Speed Counters.

Lastly, the Duels will also be done on Manual Mode, rather than auto-pilot.

It was also because of the WRGP that the unique Field Spell Card, "Speed World" was upgraded to "Speed World 2", which is an official card for this tournament. "Speed World 2" cannot be destroyed.

The preliminary rounds for the WRGP are formed like a league and play in a round-robin style. There are 32 participating teams in total, which are then divided into 8 blocks with each block containing 4 teams. Those teams compete against each other. Originally the 2 top teams in each block would advance further in the tournament, but due to the competition being temporarily suspended to repair the damage to the city done during the Diablo incident, some of the matches were cancelled, therefore only 1 team in each block advanced.

In Block A, the only teams known to be there are Team 5D's, Team Unicorn and Team Catastrophe.

In the end, the winning teams left, compete against each other in a tournament.