From Yugipedia
Jump to: navigation, search
This article is about the world which is named after Darkness. For the world associated with Millennium Items and Shadow Charms that is also called the "World of Darkness" in the Japanese version, see Shadow Realm.

The World of Darkness (ダークネスの世界 Dakunesu no Sekai) is a realm that exists between the alternate dimensions of Duel Spirits. In the World of Darkness, humans are tortured constantly by being forced to live visions of their dreams being crushed, until they give up on their individuality. Whoever is sent there is erased from the memory of others.

Yusuke Fujiwara attempted to summon Nightshroud in the Abandoned Dorm. This opened a portal to the World of Darkness, pulling him into it and infecting the dorm with dark powers.[1] Oddly, this resulted in the dorm gaining the ability to pull people into the other World of Darkness.[2]

According to Nightshroud, the World of Darkness existed before life on Earth, and is the polar opposite of life, although it is not death. It will exist as long as darkness exists in the hearts of people, causing Nightshroud to manifest once again in the real world.[3] 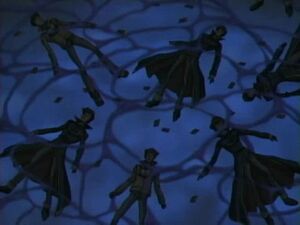 Students trapped inside the World of Darkness

People are brought into the World of Darkness when they succumb to the darkness in their hearts, which takes on replete forms. For example, Tyranno Hassleberry would assume the life of the dinosaur whose bone is in his leg which was that of a predator. He would then fall prey and be agonized by the dinosaurs he loves. On the other hand, Syrus Truesdale would have to Duel to gain his brother Zane's happiness until the day Zane dies.

During the fourth season of Yu-Gi-Oh! GX, Trueman and Nightshroud pull several people, including Sartorius, Sarina, Axel Brodie, Tyranno Hassleberry, Taigo Sorano, the many residents of Domino City, all the students at Duel Academy (save Jaden Yuki), and eventually the whole world, into the World of Darkness. However, Jaden is able to get all of the victims to focus on their dearest memories, and the bonds with their cards, allowing them to escape. After Jaden defeats Nightshroud, the latter and the World of Darkness are both destroyed.