Yami Kuroda ( Kuroda Yami), nicknamed Dark Kuroda (ダーク Dāku Kuroda), is a character in the Yu-Gi-Oh! OCG Structures manga. He was called one of the Four Duel Kings during elementary school, and puts on a very over-the-top persona during Duels, calling himself the "servant of darkness".

During elementary school, Kuroda was known as one of the Four Duel Kings, and was known for being the strongest of the four. He was also known for being a hassle to deal with due to his habit of announcing himself as the "servant of darkness" and other such delusions.

He and his sister Tsukiko Kuroda are frequent visitors to the Satellite Shop. During one visit, while he had stepped away, Shoma Yusa approached Tsukiko, who seemed alone and without a Duel partner, to ask if she wanted to play. Kuroda was disgusted by Shoma's apparent affront on his little sister's honor as he tried to seduce her, and challenged him to a Duel. Jukyu Goriki protested that Shoma is new in town and wouldn't know Kuroda or his sister, but Shoma agrees to Duel.

The Duel began, and Kuroda used his fearsome "Mathmech" monsters to summon the near-invincible "Geomathmech Final Sigma", maintaining his persona all throughout, with declarations of the darkness that is coming to Shoma, or making up bizarre Summoning speeches on-the-spot. However, while his monster was powerful, Shoma proved that it was only a single monster, and could be overcome if you had the right materials to deal with it. 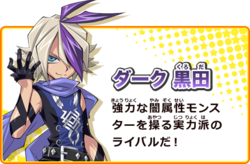 Using his "Tenyi" Deck, he quickly removed Kuroda's defenses, then destroyed "Final Sigma" and inflicted large damage to Kuroda. Despite the Solid Vision system in their Duel Disks not inflicting any physical damage, this still caused Kuroda to cough up a large amount of blood. Shoma wanted to end the Duel there and call an ambulance, but Jukyu explained to him that Kuroda keeps packets of blood prepared for situations like these.

Kuroda began his next turn, and Summoned another "Final Sigma" to replace the first, determined to end Shoma in a single attack. However, much like Jukyu before him, Kuroda didn't have an answer to the large amount of "Tenyi" monster effects and other Wyrm support Shoma had in play. Eventually, despite all his strength of will and the power of darkness flooding through him, the second "Final Sigma" is destroyed, and he is defeated by Shoma. Kuroda lamented that he couldn't protect his precious sister's honor, at which point Tsukiko approached him... and told him to shut up already.

Despite that, Shoma had a great time Dueling Kuroda, and told him that he would be looking forward to their next Duel. Kuroda let the act drop a little, and accepted with a smile.

Kuroda's first deck shown is a "Mathmech" Deck, focused on bringing out "Geomathmech Final Sigma" and using its inherent protection to overwhelm his opponent.

In the Team Battle Event, Kuroda uses a "Chaos" Deck.

Kuroda later builds a "Drytron" Deck for the "Challenge the World Champion" event. This Deck includes some of his sister's cards, and was built with their joint feelings to fight Ohza.