This Duel is loosely based on the Monster World game played by Yami Yugi and Yami Bakura in the manga.

After Joey Wheeler's victory over Rex Raptor, the gang celebrate. Some time later Bakura Ryou encounters the group and joins them in a friendly conversation. The gang talk about their favorite cards in Duel Monsters:

Bakura proposes a friendly duel with Yugi using his friends's cards in his deck. Before the duel commences, Bakura reveals that, like Yugi, he too has a Millennium Item, the Millennium Ring, which he uses to separate the souls of Yugi and his friends. As he tries to take the Millennium Puzzle, Yami Yugi appears and says that if he wants it, he must defeat him.

"Bakura" reveals that the real Bakura is not in his body, rather a thief and a stealer of souls. Knowing this, Yami Yugi accepts the challenge.

This duel is played as a Shadow Game, and if any of Yugi's friends were destroyed in this game, they die in the real world.

Turn 1: Yami Yugi
Draws a card. Summons "Cyber Commander" (750/700) in Defense Mode. When this happens, Tristan appears as Cyber Commander. Yugi is shocked about this, since Yugi's friends are now sealed in their favorite cards.

When Yami Yugi asks what happened, Yami Bakura explains that if any of Yugi's friends are destroyed during the shadow game, they die in the real world.

Turn 5: Yami Yugi
Draws a card. Joey attacks the face-down monster, revealing itself to be "Morphing Jar" (700/600). This actiates it's effect, forcing both duelists to discard their hands and draw five new cards.

Turn 7: Yami Yugi
Draws a card. Summons "Dark Magician" (2500/2100). Since it is Yugi's favorite card, Yugi is summoned as Dark Magician. Yami Yugi plays the Magic Card Monster Reborn to resurrect Tristan. Yugi attacks the monster card, but it is revealed to be another "Morphing Jar". This causes both duelists to once again discard their hands and draw five new cards.

Turn 9: Yugi
Draws a card. Yugi is shocked since the card he drew was "Magician of Faith". Yami Bakura activates his trap card, Just Desserts, inflicting 500 points of damage for each monster Yami Yugi has out on the field (Yami Yugi: 2000 → 500). Yami Yugi sets "Magician of Faith" in Face-Down Defense position. Tea suddenly appears as Magician of Faith. Yugi attacks the face-down monster, revealing it to be "Electric Lizard" (850/800) and destroys it, but not without suffering from it's effect, paralyzing Yugi. Yami Yugi sets a card face-down.

Turn 11: Yami Yugi
Draws a card. Joey attacks the Man-Eater Bug, but before it activate's it's effect, Yami Yugi activates "Horn of Heaven", sacrificing Joey to stop the effect of Man-Eater Bug. The effect of Tea's card activates, allowing Yugi to bring back a Magic Card from his Graveyard. He chooses and plays "Monster Reborn" to revive Joey. 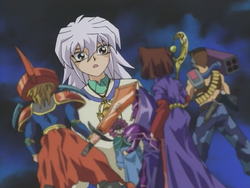 The players, dressed as their cards

Yami Bakura is trapped in the Graveyard and becomes the victim of the Reaper of the Cards.

Bakura explains how he got the Millennium Ring to Yugi. Tristan, Joey and Tea wake up, thinking what happened to them was a dream. Before Tea could put the pieces together, they hear a scream from a distance and decide to face this danger together.