Yasmin, known as Sara in the Japanese version, is a "Gravekeeper's Assailant" Duel Monster spirit appearing in the Yu-Gi-Oh! GX anime.

Dan Scheidegger from Upper Deck Entertainment has claimed the name "Yasmin" was chosen for the English dub to preserve the exotic feel the name "Sara" has on Japanese audiences when presented to an American audience.[1]

Jaden Yuki met Yasmin while he was searching for his friends in another world. She rescued him from harm, though he was ultimately discovered and forced to Duel Gravekeeper's Chief in a Shadow Duel as he demanded that all intruders seen as tomb robbers be buried alive.[2] Jaden won the the Duel and received one half of the Shadow Charm pendant. After that, the rest of the Gravekeeper's tribe still desired to punish Jaden and his friends for trespassing, but Yasmin intervened and helped them escape, revealing herself as "Gravekeeper's Assailant" in the process. Yasmin asked Jaden to tell the person with the other half of the pendent that she is still alive as she aids Jaden and his friends in their escape.[3] This ends up being Atticus Rhodes, but Jaden was not shown to mention Yasmin to him at any point after that.[4] 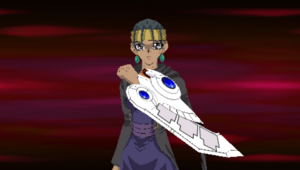 Yasmin, in the Tag Force series

Yasmin appears in the first three games of the Tag Force series as an opponent and possible partner.