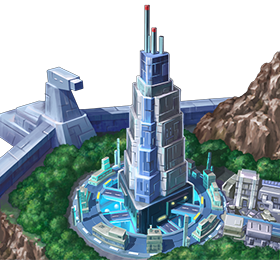 Yggdrasil (ユグドラシル, Yugudorashiru) is a tower on the Ragnarok island from Yu-Gi-Oh! 5D's Duel Transer.[1]

It is named after the tree Yggdrasil from Norse mythology.

The Duel of Legends Cup, hosted by Surtr on the Ragnarok Island, is conducted inside Yggdrasil, and its final round takes place at the very top of the tower. To reach him, duelists must duel their way through the tower, facing against other duelists and various Transcenders.

The very first area of the game, Yggdrasil Entrance (ユグドラシル入口, Yugudorashiru Iriguchi) has one single floor, and, due to not being inside the tower, has no Transcenders.

After finishing Yggdrasil 5F, Odin sends everyone to Bifröst.