Yoshi Hogan is a character from the Yu-Gi-Oh! 5D's manga. He is Crow Hogan's little brother.

Yoshi has a problem in his legs, and needs to be kept in a wheelchair. It is unknown what the cause of his infliction is, but he needed to undergo surgery. However, he had no courage to do it. Crow was unsure about entering the D1GP, so Yoshi tells him that if Crow entered the D1GP and became Duel Champion, it'd give him courage to undergo the surgery, also the prize would make the cost of the operation mean nothing. Crow then jokes about Yoshi looking like being 80, then smiles, and makes this promise with Yoshi. 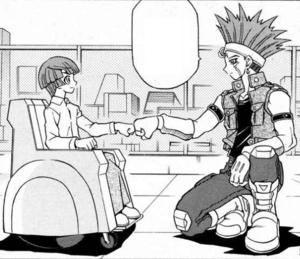 The promise between Crow and Yoshi.

An omake featured in volume 4 revealed that Yoshi was supposed to have a twin brother named Tsune at first, but with Leo and Luna already in the manga, having two sets of twins was deemed unnecessary. As a result, Tsune was removed from the manga.