Yozaka, known as Yoroizaka in the Japanese version, is a character in the Yu-Gi-Oh! VRAINS anime. He works alongside George Gore and Kenchi as a Bounty Hunter for SOL Technologies, attempting to capture Playmaker.

Yozaka is a fair-skinned young man with brown eyes and spiky brown hair. He wears the same uniform as Gore and Kenchi; he wears a green visor with a thin black lens. He wears a form-fitting forest green leotard with blue shoulderpads that is belted at the cuffs under teal torso armor fastened with straps over the shoulders and the SOL Technologies logo over his heart, which is decorated at the torso with a blue plate. He also wears sand green leggings, and olive green boots and gloves with grey soles and hands that are lined by red.

During Are you ready? and when he visited Gore in the hospital, Yozaka wore more casual clothes; a navy blue jumper, brown shorts, and dark shoes.

Yozaka formed a bounty hunting team with George Gore and Kenchi. They were hired by SOL Technologies to hunt Playmaker. They were briefed by Akira Zaizen and awaited the arrival of the final hunter, The Shepherd.[1] When Shepherd arrived, he argued with Gore. The team tracked down Playmaker, with Gore aiming to Duel him.[3] Gore had Kenchi and Yozaka flank Playmaker to prevent his escape. They were both hit by a trap ordered by Zaizen, which Playmaker and his ally Soulburner avoided, leaving Gore on his own.[4]

Playmaker and Soulburner logged into LINK VRAINS again, and Yozaka and Kenchi wasted little time in pursuing Playmaker once Soulburner was trapped.[5] Playmaker's Ignis unleashed a Data Storm that logged Yozaka out, though he was able to log back in shortly afterwards.[6] He challenged Playmaker to a Speed Duel, beginning by swiftly Summoning "Gouki The Solid Ogre" and setting up a defense with "Gouki Unity" and "Gouki Twistcobra". Playmaker was able to bypass Yozaka's monsters' immunity to card effects with the effects of his "Security Dragon" and "Firewall Dragon", returning Yozaka's monsters to his hand to clear his field and attacking him directly with "Dual Assembwurm" and "Firewall Dragon", defeating Yozaka and logging him out again.[2]

Yozaka, Kenchi and The Shepherd were sent to investigate a new Ignis, though they were unable to get hold of Gore. They arrived in a new world and were set upon by dozens of Bits and Boots.[7]

After Gore fell into a coma due to the stress of his A.I. Dueling Chip when Playmaker defeated him, Yozaka and Kenchi visited him in the hospital, and they were present alongside Gore's former manager and the children and owner of the orphanage when Gore awoke from his coma.[8] 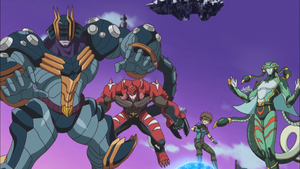 Yozaka plays a "Gouki" Deck. He uses a more defensive variant than Kenchi or Gore, focusing on the dual-protections granted by "Gouki The Solid Ogre" and "Gouki Unity".