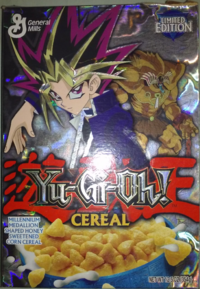 Yu-Gi-Oh! Cereal is a limited edition cereal product that was briefly produced by General Mills during 2003.

Details of this product was first announced in a press release from General Mills on September 2, 2003. Steve Vekich, the marketing manager for promotional cereals at General Mills, was quoted as saying, "We're thrilled to bring Yu-Gi-Oh! to life through our limited edition Yu-Gi-Oh! Cereal. We've captured the essence of Yugi and his favorite monsters in both our cereal and its packaging to deliver a product Yu-Gi-Oh! fans will love."[1] At the same time, General Mills also announced Yu-Gi-Oh!-related promotions for Go-Gurt, Fruit Gushers, and other General Mills cereals.

The suggested retail price of the cereal was marked at USD$2.49.[2] The cereal box contained trivia questions on its side that could be answered to obtain code words that allowed people access to certain parts of www.yugioh.com.[3]