"Millennium Enemy 8: Fight! Fight!!" is the fifty-seventh chapter of the Yu-Gi-Oh!' manga.

As the adventurers continue to battle Zorc, they are aided by Ryo Bakura, who hinders Dark Bakura's play.

Jonouchi is after stabbing out Zorc's left eye and dropping his HP to 178. Angrily Dark Bakura thinks that he was nice enough to let them play in his world and they have repaid him by rebelling against the master. He had previously planned on leaving them live on as Monster World miniatures, but now he intends to kill them.

Ryo Bakura takes control of Dark Bakura's left again and types "I won't let you control me anymore! I'm going to help my friends strike you down!" Dark Bakura recollects that Zorc is his avatar in this game and since Zorc has lost his left hand, Ryo Bakura's consciousness has crept out of where he had sealed it and taken control of his left hand. Dark Bakura asks what Ryo can do with just one hand and slides the computer to the edge of the table, where his left hand can't reach.

Dark Yugi is unaware that Ryo is controlling Dark Bakura's left hand, but realizes something is going on, judging by how Dark Bakura's expression changed when he looked at the computer screen. Dark Yugi at least knows that Dark Bakura made some kind of miscalculation and thinks that it could be the key to defeating Zorc.

The game continues and Dark Bakura explains that Jonouchi, the warrior struck a perfect hit, gouging out Zorc's left eye, but only lowered Zorc's HP by a fraction. The adventurers worry that no matter how many Critical Hits they get, they're unable to inflict and real damage to Zorc. They're all Level 1, while Zorc is Level 15.

Each of the adventurers only has 1 HP, so Dark Yugi suggests that they get Anzu, the magician, to use her healing magic to restore their HP. However he fears that if Zorc attacks before then, they'll all be dead for sure. Anzu prays for her next turn to come and thinks being such a low Level, her magic isn't strong enough to raise the dead, so if anyone dies in this game, they'll stay dead.

Dark Bakura checks the initiative scores and announces that Anzu goes next, but since Zorc's score is tied with Anzu's they must go at the same time. In this the first attack shall be decided by dice roll, he says and asks if Dark Yugi is okay with that. They shall both throw the dice and whoever gets closest to 00 goes first.

The dice are tossed and Dark Bakura thinks that victory is his. The souls of one of his former players is sealed in his brainwashed dice and they always roll a Super Critical. Dark Bakura sees hs dice stop on 00, while Dark Yugi's stop on 09. Dark Bakura laughs that he has won and begins to announce Zorc's next attack. However Dark Yugi laughs and asks if Dark Bakura is blind. He tells Dark Bakura to take a better look at his roll. Dark Bakura's dice have actually stopped on 10, to his surprise. 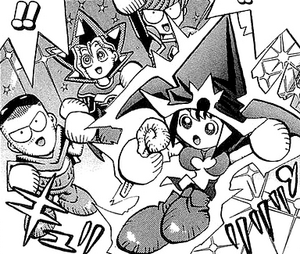 Anzu takes her turn and uses "Healing Magic of Luona" to recover the adventurers HP.

Dark Bakura wonders why the dice didn't roll a Super Critical and on inspection finds that they are regular dice, rather than brainwashed ones.

Although the adventurers are healed, Dark Bakura says that they are nothing more than micro-organisms compared to Zorc. Even at maximum HP, he says that they shall be blown to dust on Zorc's next turn; Zorc's attacks hit on a roll of 80 or less and if he hits all of them will take damage. He gets ready to roll the dice, but his left hand tosses a different pair, before he gets a chance. He identifies the dice thrown by his left hand as the brainwashed dice. Ryo Bakura mentally tells Dark Bakura that he won't let himself be controlled anymore. The dice land on 99, a fumble, and causes Zorc's attack to backfire and strike himself, dropping his HP to 125. 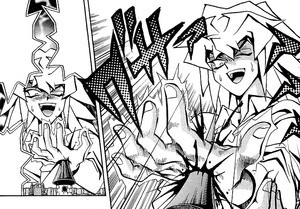 Dark Bakura clasps his left wrist and damns his left hand. He then pulls his left hand down on the castle diorama, causing the roof of a tower to pierce through it. He laughs and asks how Ryo Bakura likes the feel of durable polyresin. Dark Yugi hears Dark Bakura mention Ryo Bakura and the adventurers are surprised by Dark Bakura's facial expression. Yugi wonders if the Bakura that they're facing is different than the Bakura who was nice to them earlier. The others agree that this must be a different Bakura; Ryo Bakura was their friend and wasn't lying to them earlier.

Yugi, the beast tamer goes next. Dark Yugi announces that the beast tamer will try to use his "Hand Power" on Zorc. Dark Bakura is surprised and asks if Dark Yugi honestly thinks that ability which turns enemies into allies will work on Zorc. He laughs that it is a useless effort as Zorc will never become their ally. Dark Yugi sticks with his choice and rolls a 05. 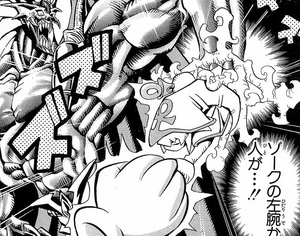 Ryo Bakura is pulled out of Zorc's arm.

The training hand appears and moves towards Zorc, who laughs that they would have to raise their training level to a million before they could even think of making him their ally. However the training goes after Zorc's left wrist and pulls Ryo Bakura, whose avatar is a white wizard out of Zorc's arm.

Bakura thanks everyone for saving him and explains that he is an NPC, non-player character, created by Ryo Bakura. He is Level 13 and asks to join the adventurers party. The others gladly accept his request.

Honda, the magic gunman goes next. Dark Yugi rolls a 15 and Honda shoots a hole in the left oz Zorc's stomach. The adventurers are surprised by how much more effective the attack was than before. Bakura explains that as a non-player character he obeys the will of the other game master, Ryo Bakura, so he helped by lowering Zorc's defenses with his white magic.

Part of episode 27, "Friendship - From Legend to Myth", of the Toei Yu-Gi-Oh! anime is based on this chapter.