"Double Trouble Duel, Part 3", known as "The Fiend Dragon - Black Demons Dragon" in the Japanese version, is the twenty-first episode of the Yu-Gi-Oh! second series anime. It first aired in Japan on September 12, 2000 and in the United States on March 30, 2002.

Yugi and Joey now have 10 Star Chips each. However, they must still choose one of the brothers' doors, and Yugi still does not trust either brother. He has correctly guessed that the brothers can alter the real-life labyrinth, ensuring that whichever door their enemies choose does not lead to freedom.

However, Yugi does not mention this realization right away. He holds up two coins, each of which bears the emblem of Para or of Dox. He holds them in his fists, saying he will open one hand, and the concealed coin will be the chosen door. He opens one hand, and when the brothers see the Dox mark, they accept his apparent selection of the Para door. Then they smile and reveal that the Dox door was correct all along. At this point, Yugi reveals their secret, and he opens his other hand, showing the Dox coin. The first coin had been marked with one emblem on each side. Because the brothers fell into their own trap - a hand that can tell lies - the friends are free.

Down in Pegasus's dungeon, Seto Kaiba finds Mokuba, but is soon confronted by Pegasus, who uses his Millennium Eye to lock Mokuba's soul in a card. He tells Kaiba that if he wants to see Mokuba again, he must defeat Yugi.

Yugi and Joey win, obtaining the necessary ten Star Chips needed to enter Pegasus Castle. Yugi then uses two marked coins to select Dox's door while ensuring that it is the correct one to lead him and his friends out of the maze.

Turn 23: Para
"Sanga of the Thunder" attacks "Flame Swordsman", but Yugi activates his face-down "Mirror Force" to reflect the attack back at Para's and Dox's monsters. Para activates the effect of "Kazejin" to reduce the battle damage to "Gate Guardian" to 0, but the reflected attack still destroys "Monster Tamer", and Para receives damage equal to the difference between the ATK of the attacking "Sanga of the Thunder" and the destroyed "Monster Tamer" (Para: 1700 → 900 LP).

Turn 24: Joey
"Flame Swordsman" attacks "Kazejin", but Dox activates the effect of "Suijin" to reduce the battle damage to 0. 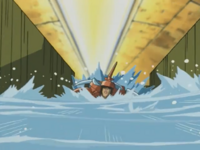 "Flame Swordsman" gets washed away by "Suijin's" flood attack.


Yugi draws. He then Sets a card and Normal Summons "Summoned Skull" (2500/1200) in Attack Position. Using the trail of water left by "Suijin's" attack, "Summoned Skull" electrically attacks "Suijin" without being adjacent to it. 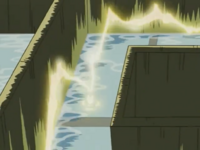 Turn 30: Yami Yugi
Yugi draws. He then releases "Dark Magician" from the "Hat" it was under, then moves it to the end of the labyrinth, right in front of "Gate Guardian". He then activates "Reborn the Monster" to Special Summon "Suijin" (2500/2400) from Dox's Graveyard to his side of the field in Defense Position.

Turn 31: Para
Para begins his turn without waiting to find out what monster Yugi revived. "Gate Guardian" attacks "Dark Magician", but Yugi activates the effect of "Suijin" to reduce the battle damage to 0.