"Face Off, Part 1", known as "Duel of Destiny! Yugi vs Kaiba" in the Japanese version, is the twenty-second episode of the Yu-Gi-Oh! second series anime. It first aired in Japan on September 19, 2000 and in the United States on April 6, 2002.

In the dungeon, Pegasus gives Kaiba five Star Chips and makes a deal with him. If he can beat Yugi, then he may Duel Pegasus to rescue Mokuba's spirit. Meanwhile, Yugi and the group emerge from the underground tunnel and arrive outside Pegasus Castle. Téa thinks about how Yugi often switches from a gentle and caring nature to a more forceful, slightly colder and unfriendlier one. She concludes there must be two Yugis after remembering his Duel with Bakura. She recalls how she first became friends with Joey and Yugi. She was working at Burgerpalooza despite being too young and she feared that Yugi and Joey would give her real age away one time when they visited. She admitted she was working there to raise money to study ballet dancing and was shocked to find they encouraged her instead of mocking her. At a later point, she was lured into a warehouse by a mugger. She was rescued by Yami Yugi who challenged the mugger to Duel Monsters and Mind Crushed him. 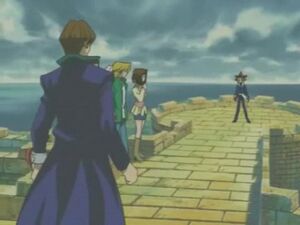 Kaiba and Yugi prepare to face off.

In present day, the gang approach the castle door, but it is blocked by Kaiba, who challenges Yugi to a Duel. After Kaiba insists his attitude has changed, Yugi accepts. They Duel on an open area atop the castle using Kaiba's new-and-improved Duel Disks. Bandit Keith arrives at the castle in time to watch, but he stays out of view of the others. The Duel is pretty close. Each player is brought down to 1500 Life Points, but Kaiba has a plan to fuse all three of his "Blue-Eyes White Dragons" to form the mighty "Blue-Eyes Ultimate Dragon".

Turn 5: Kaiba
Kaiba draws "La Jinn the Mystical Genie of the Lamp" and subsequently Normal Summons it (1800/1000) in Attack Position.

The original Japanese version (left) and the English version with the video camera edited out (right).