"Duel Identity, Part 2", known as "The Legendary Strongest Warrior - Chaos Soldier Descends" in the Japanese version, is the thirtieth episode of the Yu-Gi-Oh! second series anime. It first aired in Japan on November 14, 2000 and in the United States on August 31, 2002.

The Duel between Mai Valentine and Yugi Muto continues. Yugi is down to 300 Life Points while Mai still has all of hers. Yugi and Yami Yugi continue to struggle internally. Mai then explains that after losing her Duel with Joey, it made her realize that the reason why she cheated in her Duels was because she was afraid of losing and of trusting herself. She also says a Duelist can learn more from a defeat than from a victory. After the conversation with both Mai and Yami Yugi, Yugi realizes he has to face his fear as well, and finally lets Yami Yugi Duel without holding him back. Yugi uses "Brain Control" to take control of "Harpie's Pet Dragon". He then Tributes "Harpie's Pet Dragon" for the effect of "Catapult Turtle". This not only subtracts half of the dragon's ATK from Mai's Life Points, but it also destroys Mai's "Mirror Wall". Yugi also realizes that "Shadow of Eyes" cannot affect female monsters, so he Summons "Mystical Elf" in Defense Position. 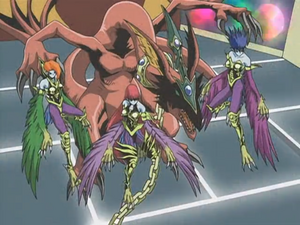 However, Mai uses "Monster Reborn" to revive "Harpie's Pet Dragon" and uses her "Harpie Lady Sisters" to destroy "Mystical Elf", wiping out his defense. Yugi draws "Swords of Revealing Light" and activates it, preventing Mai from attacking for three turns. During those turns, Yugi Summons "Kuriboh" and "Gaia The Fierce Knight". On the final turn, Yugi draws "Black Luster Ritual" (Pegasus senses a sudden surge of power when this happens) and uses it to Tribute his monsters and Ritual Summon "Black Luster Soldier", which destroys "Harpie's Pet Dragon". Losing her most powerful monster and not willing to watch her "Harpie Lady Sisters" be destroyed, Mai surrenders and that wins Yugi the Duel by default.

Turn 13: Mai
Mai draws. She then activates "Elegant Egotist" to turn one "Harpie Lady" into three "Harpie Ladies" in Attack Position (2450/2100 for newly summoned "Harpies"). Mai decides not to attack as she believes Yugi's Set card is a Trap Card.

Turn 14: Yami Yugi
Yugi reveals his bluff by activating his face-down "Monster Recovery", which returns "Catapult Turtle" and his hand to his Deck and allow Yugi to draw five new cards. Yugi draws "Celtic Guardian", "Monster Reborn", "Griffore", "Kuriboh", and "Mystical Elf". Yugi Normal Summons "Mystical Elf" (800/2000) in Defense Position. This monster is unaffected by the effect of "Shadow of Eyes" since it is a female monster.

Turn 16: Yami Yugi
Yugi draws "Swords of Revealing Light" and subsequently activates it. Mai's monsters can not attack for three turns and all of her monsters must be face-up. Yugi then Normal Summons "Kuriboh" (300/200) in Attack Position.

Turn 17: Mai
Mai draws, then passes her turn. Due to the effect of "Swords of Revealing Light", Mai cannot attack for two more turns.

Turn 19: Mai
Mai draws, then passes her turn. Due to the effect of "Swords of Revealing Light", Mai cannot attack for one more turn.

At this point, Mai surrenders.