"Keith's Machinations, Part 2", known as "Travel Through Time! Red Eyes Black Metal Dragon" in the Japanese version, is the thirty-second episode of the Yu-Gi-Oh! anime. It first aired in Japan on November 28, 2000 and in the United States on September 7, 2002.

Bandit Keith and Joey Wheeler continue their Duel, with Keith eventually having to contend with Joey's mimicry of his battle strategy and the more powerful "Red-Eyes Black Metal Dragon".

The second Duel of the Duelist Kingdom finals continues between Joey Wheeler and Bandit Keith. The Duel remains close until Keith Summons "Barrel Dragon", a 2600 ATK monstrosity with the effect of being able to destroy up to three monsters in one attack. Not even Joey's "Time Wizard"/"Baby Dragon" combo can defeat it due to Keith using "Time Machine" to revive "Barrel Dragon" after "Thousand Dragon" destroys it in battle.

Keith, refusing to accept defeat, demands the Duel be declared invalid since Joey used Mai's card. Joey admits this is true and asks how he could have known that. Pegasus, at this point declares that Keith stole Joey's card. Joey calls him a snake and Pegasus also says that Keith cheated by hiding two of his "7 Completed" cards beneath his wristband. Pegasus orders his guards to take Keith away, but Keith knocks them out cold, jumps towards Pegasus, and points a gun to his head (the gun is removed in the US version), demanding the prize money. Pegasus activates a trap door on the ground, sending Keith through a tunnel and out into the ocean. With Joey the winner, he now has to face Yugi in the next Duel before the final match against Pegasus.

Turn 13: Bandit Keith
Keith draws. He then Sets a card and Normal Summons "Barrel Dragon" (2600/2200) in Attack Position. Each of "Barrel Dragon's" 3 revolvers have a 50% chance of attacking. For each revolver that succeeds, it will attack and destroy one of Joey's monsters. Two of the revolvers succeed, so "Barrel Dragon" attacks and destroys "Axe Raider" and "Garoozis" (Joey: 1150 → 850 LP).

Turn 16: Joey
Joey draws. He then Sets a monster. 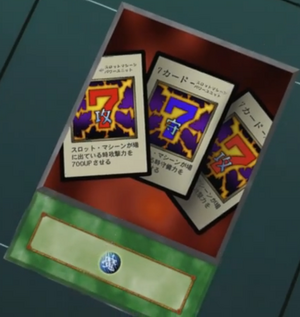 Turn 21: Bandit Keith
Keith draws. He then takes another "7 Completed" from his wristband while making it seem as if he drew it. Keith activates "7 Completed", equipping it onto "Slot Machine". Keith chooses to increase the ATK of "Slot Machine" by 700 ("Slot Machine": 2000 → 2700/3000). Keith then Normal Summons "Blast Sphere" (2900/1400) in Attack Position. Keith then activates the effect of "Blast Sphere", equipping it to "Red-Eyes Black Metal Dragon". At the End Phase, it will destroy itself and "Red-Eyes Black Metal Dragon" and then inflict damage to Joey equal to the difference in their ATK.