A new game shop has opened up in town, upsetting Grandpa Muto as Kame Game now have more competition. Joey challenges its owner, Duke Devlin, to a Duel; if Duke wins, Joey becomes his servant for one week. If Joey wins, Duke must close down his shop.

Grandpa Muto is disgusted because his game shop has new competition. Yugi decides to sneak over and check out the competition with Téa. Outside the building, folks are giving out publicity posters about the shop's new game, Dungeon Dice Monsters. Meanwhile, the store's owner, Duke Devlin discusses getting revenge against Yugi. He claims that Yugi only defeated Pegasus in Duelist Kingdom by cheating, and plans to expose him to the world. 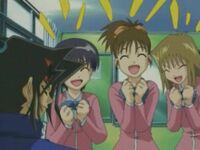 While Yugi discusses these developments with his friends, Joey notices that a new student is attracting all the girls with dice tricks. The student, named Duke Devlin, gets Joey involved with one of the tricks, and by playing off of Joey's gullibility, the trick works. Joey gets angry at that, and he challenges Duke to a Duel Monsters game. Duke agrees, but on the condition that they will only use cards from new Booster Packs. They also make a bet: if Duke wins, Joey will be his servant for one week, but if Joey wins, Duke has to close his shop. Yugi protests that Joey shouldn't be made to use cards he's not used to using, but Joey agrees to the deal.

After school, they all go the game shop, which belongs to Duke and has a Duel arena. Joey picks out several packs of cards with some nervousness, but when he opens them, he becomes confident again. Duke announces that he will broadcast the duel on TV, and some of the girls from school have even shown up as cheerleaders for Duke, which gets Joey even more angry. Then the duel begins. Joey takes a big lead early on, Summoning a high-level monster with a power-up effect to top it off. Duke goes into a simple defense, and Joey pounces by Summoning "Mad Sword Beast"—the first monster with piercing damage ever seen in the anime. Duke recovers quickly by using a trap to destroy Joey's high-level monster. Yugi worries about this, seeing that Joey isn't looking very far ahead with his moves. Duke then makes a counterattack, which clears Joey's field. With the pressure on him, Joey topdecks "Goblin Attack Force", and he Summons this latest beatdown card for his third attack in as many turns. After this, his monster drops into Defense Position by its own effect, which is something Joey had forgotten about, but he's not too worried. Duke only has 50 life points left, so Joey knows he'll win, and he even imagines the cheerleaders cheering for him. However, Yugi notices that Duke is completely calm, and sure enough, Duke takes his next turn, "Gradius" for an attack. Joey mocks such a weak monster, but Duke activates his face-down "Limiter Removal" to double its ATK. This stops Joey's taunts right away, but at least his monster is in Defense Position, so his life points are safe. Duke then plays his last card, "Fairy Meteor Crush", which Duke describes as being a spell version of "Mad Sword Beast". This takes a second to sink in, but when it does, Joey goes into a panic. Helplessly, he watches as Duke attacks, blasting straight through all his goblins and wiping out his life points in one attack.

Defeated and dejected, Joey gets down from the arena. Yugi tells Joey that he did well. Duke snaps his fingers, and a cheerleader brings Joey a dog suit. Duke orders Joey to put it on. He flicks a die at Joey's head, who complains, but Duke tells him to bark. Seeing his friend not only ordered but humiliated, Yugi gets angry, and the Millennium Puzzle activates. Yami Yugi tells Duke to stop the cruelties and challenge him. If he defeats Duke, Joey is released from the deal and he gets his freedom back. Duke agrees, but he says that they will play Dungeon Dice Monsters. He also states that if he wins, Yugi will swear on his Grandfather´s life that he will never play Duel Monsters again and he will also give up his title of "King of Games" to Duke. Tristan, Tea and Joey protest to Yugi that he shouldn't risk all of that just to get Joey his freedom back. Duke angrily flicks another die at Joey for being rebellious against him, but this time Yami Yugi catches the die and he agrees to these terms regardless of the risks because he will not stand there and let him destroy Joey's dignity like that. Yami Yugi knows his friends are worth more than any title or game in the world and he will stick by them no matter what. Those are things Duke will never understand and he will battle him for Joey's sake. The episode comes to an end with both of them squared off for the confrontation.

Turn 7: Duke
Duke draws. He then Normal Summons "Gradius" (1200/800) in Attack Position. Duke then activates his face-down "Limiter Removal" to double the ATK of "Gradius" ("Gradius": 1200 → 2400/800) until the End Phase. When it is Duke's End Phase, the last effect of "Limiter Removal" will destroy "Gradius". Duke then activates "Fairy Meteor Crush", equipping it to "Gradius" and granting it the ability to inflict piercing damage. "Gradius" attacks and destroys "Goblin Attack Force". "Gradius" then inflicts piercing damage to Joey (Joey 1600 → 0).