"Obelisk the Tormentor", known as "This City Becomes Battle City!" in the Japanese version, is the fifty-fourth episode of the Yu-Gi-Oh! anime. It first aired in Japan on May 8, 2001, and in the United States on November 30, 2002.

That evening, Yami Yugi and Téa visit the Domino Museum, where they find a stone tablet depicting between a battle between a Pharaoh and a high-ranking Priest. One looks like Yugi while the other looks like Kaiba. They are then greeted by Ishizu Ishtar, holder of the Millennium Necklace. She introduces herself as one of the tribe which, along 3,000 years, have been protecting the Pharaoh's memories. She explains about the power of her Millennium Necklace and that she can see the beginning of a new battle. She tells Yami that, he came to the Museum of his own will and, in doing so, chose the Fate of fighting. If he wants to get his memories back, there's no other choice but to gather the 7 Millennium Items. Yami, suspicious, questions on which side she is on. Ishizu calmly replies that she isn't Yami's foe, but that she can see a man wielding a new Item who will show up soon enough in front of Yami. She adds that Yami's battle is for the sake of gaining his memories back and that his Fate will be set in motion soon enough. The rest is for Yami to confirm with his own eyes.

Meanwhile, Seto is at the KaibaCorp headquarters testing out his new Duel Disks. He faces a Duel Computer that is using the same Deck he used at Duelist Kingdom. Although the machine manages to Summon all three copies of "Blue-Eyes White Dragon" and fuse them to form "Blue-Eyes Ultimate Dragon", Seto Tributes three of his monsters to Summon his Egyptian God Card, "Obelisk the Tormentor", then Tribute his other two monsters to use its effect, destroying all of the Duel Machine's monsters and wiping out the rest of its Life Points (and overloading the system as well).

On the streets, Yami and Téa encounter Mai Valentine, who has shown up for the announcement for the upcoming tournament. They spot old rivals including Rex Raptor, Weevil Underwood and Mako Tsunami, as well as new Duelists such as Espa Roba, a boy claiming to have psychic powers. Just then, Seto appears on every television screen in the city, announcing his new Battle City tournament, which will start in one week. Duelists must have the new Duel Disks to enter it. In each Duel, the winner will receive the loser's Rarest Card. Meanwhile, the holder of the Millennium Rod becomes aware of the tournament and sends his Rare Hunters out to Duel and win Rare Cards for him.

The Flip Effect of "Cyber Jar" then activates, destroying every monster on the field. and forcing both Duelists to pick up five cards from the top of their Decks and Special Summon or Set any Level 4 or below monster they find onto the field. The remaining picked up cards are added to the players' hands. The Duel Machine Sets two monsters while Kaiba Sets a monster and Special Summons "Maha Vailo" (1550/1400), "Dark Zebra" (1800/400), "Boar Soldier" (2000/500), and "Hitotsu-Me Giant" (1200/1000) in Attack Position. 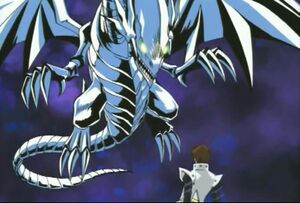 Duel Machine draws. It then Tributes both of its Set monsters, "Aqua Madoor" (1200/2000) and "Wall of Illusion" (1000/1850) in order to Tribute Summon "Blue-Eyes White Dragon" (3000/2500) in Attack Position. (NOTE: The Duel Machine could have attacked, but because it was wary of Seto's Set Spell/Trap Card, it chose to not attack.) On the End Phase, the Duel Machine discards two cards from its hand as its hand surpasses the hand size limit.

Turn 4: Kaiba
Kaiba draws. He then Tributes "Hitotsu-Me Giant" in order to Tribute Summon "Dragon Seeker" (2000/2100) in Defense Position. When this monster is switched from face-up Defense Position to Attack Position, Kaiba can destroy one Dragon-type monster on the field. He intends to use the effect of "Dragon Seeker" on the following turn.

Turn 5: Duel Machine
Duel Machine draws. It then Sets a card and Normal Summons "Lord of Dragons" (1200/1100) in Attack Position. Due to the effect of "Lord of D.", it can negate any effect that targets Dragon-Type monsters.

Turn 7: Duel Machine
Duel Machine draws. It then activates "The Flute of Summoning Dragon" to Special Summon two "Blue-Eyes White Dragons" from its hand (3000/2500 for both) in Attack Position. The Duel Machine then activates its face-down "Polymerization" to fuse all three "Blue-Eyes White Dragons" together and Fusion Summon "Blue-Eyes Ultimate Dragon" (4500/3800) in Attack Position. Under Battle City Rules, Fusion Monsters cannot attack the same turn they are Summoned, so the Duel Machine ends its turn. (NOTE: In the real game, this delay does not exist.)