Joey obtains "Insect Queen" and two Locator Cards from Weevil as per the Battle City rules.

Turn 22: Weevil
Weevil draws. He then Normal Summons "Insect Soldiers of the Sky" (1000/800) in Attack Position. Weevil then activates "Eradicating Aerosol" to destroy his Set monster: "Pinch Hopper". Since "Pinch Hopper" was sent from the field to the Graveyard, its effect activates, allowing Weevil to Special Summon "Insect Queen" (2200/2400) from his hand in Attack Position. Due to the effect of "Insect Queen", it gains 200 ATK for each Insect-Type monster on the field. There are currently six ("Insect Queen": 2200 → 3400/2400).

Turn 23: Joey
Joey draws a card and subsequently sets it. 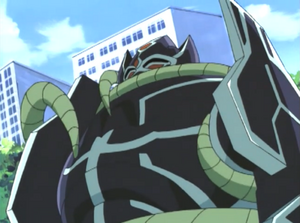 "Gearfried the Iron Knight" resists the effect of "Parasite Paracide" 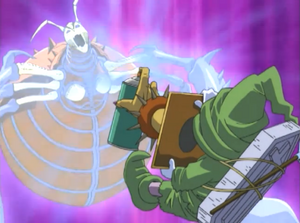