Yami Yugi continues to Duel Strings, controlled by Marik, who has "Slifer the Sky Dragon" on his side.

Turn 11: Strings
Strings draws. Strings then activates the effect of "Jam Breeding Machine" to Special Summon a third "Slime Token" (500/500) in Attack Position. Strings then Tributes all three "Slime Tokens" to Tribute Summon "Slifer the Sky Dragon" (X000/X000) in Attack Position. Since Strings summoned a monster(s) besides a Slime Token, "Jam Breeding Machine" is destroyed. Due to the effect of "Slifer", its ATK and DEF are equal to the number of cards in Strings' hand times 1000. There are currently two ("Slifer": X000 → 2000/X000 → 2000).

Yami Yugi then Sets two cards and Normal Summons "Kuriboh" (300/200) in Defense Position. (Note: "Slifer's" effect should have activated here, destroying "Kuriboh" as it has less than 2000 DEF, but by anime mechanics its effect counts as a "special attack", causing "Nightmare's Steelcage" to prevent it). On Yami Yugi's End Phase, "Nightmare's Steelcage" is destroyed as it has been two turns since it was activated.

Turn 14: Yami Yugi
Yami Yugi draws "Magic Cylinder". He then Tributes "Kuriboh" in order to Tribute Summon "Dark Magician Girl" (2000/1700) in Defense Position. The second mouth effect of "Slifer" then activates, which would reduce the DEF of "Dark Magician Girl" by 2000 and then destroy it as its DEF would drop to 0, but Yami Yugi activates his face-down "Magical Hats" to hide his "Dark Magician Girl" in one of four hats and shuffle the hats. "Slifer's" 'special attack' destroys a "Hat", but it's empty. Yami Yugi Sets two cards.

"Slifer" attacks the "Hat" with "Dark Magician Girl" inside it, but Yami Yugi activates his face-down "Magic Cylinder" and his face-down "Spellbinding Circle" in response. The activated cards resolve in reverse order: By anime mechanics, "Spellbinding Circle" decreases the ATK of "Slifer"by 700 ("Slifer": 5000 → 4300/5000) after its attack has already been launched, while the anime effect of "Magic Cylinder" redirects the original attack of "Slifer" back to it, but Strings activates the effect of "Jam Defender" to change the attack target to "Revival Jam", destroying it instead. "Revival Jam" then revives itself (1500/500) in Defense Position via its own effect. Strings then draws three cards via the effect of "Card of Safe Return" ("Slifer": 4300 → 7300/5000 → 8000). 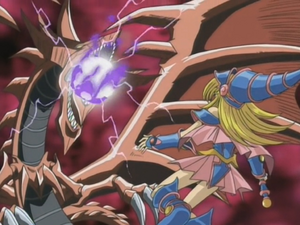