Seto Kaiba is waiting with his brother Mokuba for the Battle City finalists to arrive. The first three finalists, Yugi Muto, Joey Wheeler and Mai Valentine arrive with their friends, Tristan Taylor, Serenity Wheeler, Téa Gardner and Duke Devlin. Marik Ishtar, the next finalist, arrives but is still using his disguise of Namu. Joey is suspicious about his true motives, but eventually dismisses it. Bakura arrives even though he is still injured and announces he is also a finalist, baffling everyone. Odion comes in at this point, creating a commotion as Yugi, Kaiba and Joey recognize him as Marik, and Odion continues to identify himself as Marik, another finalist. 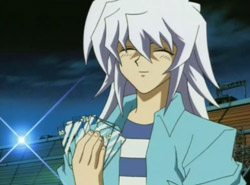 Mokuba introduces Kaiba Craft 3, a huge airship where the finals will take place. The airship lands and all the contestants enter, although Yugi's friends are initially not allowed as they are not finalists but Mokuba persuades Kaiba to let them on. Kaiba orders the airship to leave, even though the remaining finalist has not arrived, but at the last minute Ishizu Ishtar enters with a mask over her face to conceal her identity.

The finalists spend time alone in their designated rooms, except for Joey who is with Serenity and later Tristan, Téa and Duke, who do not have their own rooms. Yugi plans his deck while talking to Yami Yugi and they agree that Bakura is once again under the influence of the Millennium Ring. The finalists are called to the main hall to decide who will duel first.

A scene of Yami Bakura aggressively eating steak and saying "Not enough blood" is removed from the dub.