"Rage of the Egyptian Gods", known as "Hidden Power - Mystery of the God Cards" in the Japanese version, is the eighty-fifth episode of the Yu-Gi-Oh! anime. It first aired in Japan on December 4, 2001, and in the United States on September 20, 2003.

In the aftermath of Yami Yugi and Yami Bakura's Duel, Yugi Muto and his friends go to ask Seto Kaiba to land the airship so they can take Bakura to a hospital. Joey Wheeler, despite Mokuba Kaiba's protests, bangs on Kaiba's door. After listening, Kaiba refuses to land the airship, stating that it is not his problem and that Bakura accepted responsibility for this outcome by agreeing to Duel. He does, however, call a medical team to take care of Bakura on the ship.

Tristan Taylor leaves to look for Bakura's missing Millennium Ring on the dueling platform, dragging Duke Devlin along to get him away from Serenity Wheeler. Up top, Tristan and Duke get into a fight over Serenity in which Tristan trips and causes him and Duke to fall over the edge with Tristan barely managing to hang onto both the edge and Duke. Just as Tristan's hand slips, he is caught by Shadi and hauled back onto the platform.

In Yugi's room, while adjusting his Deck, he notices Shadi's reflection in the window. Yugi tells Shadi that he knows the spirit of the Millennium Puzzle is really the spirit of the Pharaoh. Shadi tells Yugi that all seven of the Millennium Items are onboard the ship along with all three Egyptian God cards and that the conditions are right to unlock the Pharaoh's memory.

Shadi also tells Yugi about Maximillion Pegasus' journey to Egypt, while Pegasus was trying to find a way to bring back his lover, Cecelia, and ended up discovering carvings of monsters, including the Egyptian Gods, which later became the inspiration for the game Duel Monsters. Following his discovery however and launching card production, Pegasus learned that nearly everyone involved with the production of the God Cards had begun to die under mysterious circumstances. Among them was a photo developer who fell from the window of his hotel's room, after seeing an apparition of Obelisk, having incurred the wrath of the Gods themselves. (This scene is removed from the English dub.) The rest of his team was too afraid to continue working on the project. Pegasus refused to stop making the cards however, deciding to take onto the task himself as a challenge to the Gods. On the night after he finished the cards' design, his Millennium Eye showed him a vision of ancient Egypt in his sleep, where the world was being destroyed by the Gods.

At this point, Shadi appeared to Pegasus. He told him the monsters were real and that Pegasus could not control both the darkness and the Gods at the same time; the solution was to seal the God Cards back in Egypt for they were too powerful. Pegasus, having experienced the Gods' power himself, took the completed cards and gave them to Ishizu Ishtar to be sealed.

Back in the present, Shadi tells Yami that all he needs to do to awaken his memory is to win the tournament. Shadi then goes to Ishizu, who tells him a horrible fate is awaiting Marik and that she joined the tournament to stop it. 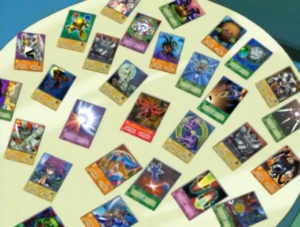