"The Tomb-Keeper's Secret", known as "The Divulged Truth of the Ishtar Family" in the Japanese version, is the ninety-fifth episode of the Yu-Gi-Oh! anime. It first aired in Japan on February 19, 2002 and in the United States on October 25, 2003.

After Kaiba's Duel with Ishizu, Mokuba leads Kaiba to where the script of "The Winged Dragon of Ra" is being translated. Kaiba is startled to realize that he somehow understands the Hieratic text and can read the words on his own.

Elsewhere on the ship, Yugi and the others go to see Mai out of worry, where they are joined by Ishizu. Joey asks Serenity if Mai has recovered any, which Serenity replies with a no and then starts to cry because Mai and Bakura have wound up unconscious because of the Duels. Ishizu quickly calms her down by explaining that even in a world of sadness, there will always be someone there for you. After Yugi questions her as to why Marik wants him dead, Ishizu agrees to tell the story of her family.

The Ishtars are the guardians of the Millennium Items and live underground in secret, away from everyone else. The secret of the Pharaoh's memory is carried over from generation to generation, tattooed onto ("carved into" in the original) the back of the succeeding male in ceremony (a fate which in this generation fell on Marik's shoulders). One year after Marik's ceremony (he was 11 at the time), he plans with Ishizu and Odion to sneak outside after their father went to bed. Ishizu reluctantly agrees after Odion says he will help if anything goes wrong, but only for an hour in the following morning. Marik is ecstatic. 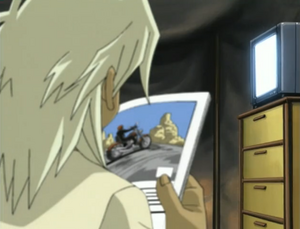 Marik sees a picture of a motorcycle for the first time

Early the next morning, after having put a pillow in Marik's bed to make it seem like he's still sleeping, Ishizu and Marik slip out into the rising sun with Odion. Marik is overwhelmed that there are so many people in the nearby town. He finds a magazine that has been trodden on and forgotten. In it, he sees a picture of a man riding a motorcycle. On a nearby television set, which he has never seen before, he sees a man on a motorcycle drive off. Ishizu quickly drags Marik off and reminds him that it's time to get back to the family. Marik begs Ishizu to let him keep the picture of the motorcycle. Ishizu, realizing there's nothing she can do to dissuade him, tells him to never let their father find out. They run into Shadi who tells them the Pharaoh is about to revive and that it is one of the Tomb Keepers' duties to guide him to his memories. After searching and failing to find Shadi again, Ishizu tells Marik to forget all he saw that day.

Upon their return, Marik points out a device that acts as an alarm to tell of someone leaving the tomb. In the darkness, they had previously missed it! Ishizu runs off in panic for Odion. Marik finds Odion being whipped by their father for his part in helping Marik and Ishizu leave (In the dub, Mr. Ishtar mentally tortured Odion with the power of the Millennium Rod. Also the whip that Mr. Ishtar uses is completely removed from this scene and all following scenes). Marik is next, but Yami Marik emerges and catches the whip as it nears him. Releasing the whip, Yami Marik takes the Millennium Rod and binds his father and Ishizu to the walls with magic, the latter of whom falls unconscious. Yami Marik proceeds to send his father to the Shadow Realm ("stabs him to death" with the Millennium Rod's hidden blade in the original). Yami Marik is about to do the same to Ishizu, but Odion regains consciousness and Yami Marik is suppressed by "good" Marik again. Marik is completely unaware of what he did. Upon seeing his father's body, he begins to panic. Shadi then appears above the body and says that is was the Pharaoh's revival that led to that fate.

Yami Yugi realizes that his revival is what led to the torment Marik is going through. Joey, however, refuses to forgive Marik, no matter what his reasons are. Ishizu states that they are the only ones who can save Marik from the darkness. After the call for lights out on the ship, everyone prepares to depart. Joey reminds Yugi of their promise to duel each other again. Serenity jokes that Joey should ask Ishizu to see if they will Duel in the final, to which Ishizu states that, since her battle with Kaiba, she can no longer see the future. She then gives Yugi the Millennium Necklace, stating that Yugi still needs the other five Millennium Items and the three Egyptian God cards to awaken the Pharaoh's memories. She also says that they originally belonged to Yugi and that her job as a Tomb Keeper is complete.

Everyone departs, leaving Serenity and Téa to take care of Mai. Téa chases after Ishizu, asking what will happen when the seven Millennium Items are returned to the tomb in Egypt. Ishizu replies simply that every soul has one place to return to. Téa is then taken control of and returns the Millennium Ring to Bakura, who wakes up instantly. In Yugi's room, he and Yami Yugi talk of what will happen when all the items are returned, with Yugi saying that it's his duty as Yami Yugi's vessel (and shedding a tear when his back is turned).

In Odion's room, Marik is about to send Odion to the Shadow Realm ("kill him" in the original), but is distracted by Yami Bakura revealing himself by talking. Yami Bakura states that the original Marik is with him. After a quick battle with their respective Millennium Items, they agree to play a Shadow Game for the items, with the only rule being the loser dies.