"Isolated in Cyber Space, Part 3", known as "Counteroffensive Rainbow Arch" in the Japanese version, is the one hundred and first episode of the Yu-Gi-Oh! anime. It first aired in Japan on April 2, 2002 and in the United States on November 15, 2003.

Turn 9: Gansley
Gansley draws "Offerings to the Doomed" and subsequently activates it to destroy "Chimera the Flying Mythical Beast" at the cost of skipping his next Draw Phase. Since "Chimera" was destroyed, Yugi activates the effect of "Chimera" to revive "Berfomet" (1400/1800) in Defense Position. 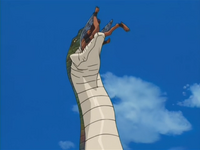 "Rainbow Snake Eingana" swallows "Berfomet", leaving Yugi with no monsters on the field.

Turn 10: Yugi
Yugi draws "Swift Gaia the Fierce Knight". He then activates his face-down "Rainbow Blessing", equipping it to "Kuriboh". As he has no other cards in his hand, Yugi Normal Summons "Swift Gaia the Fierce Knight" (2300/1700) in Attack Position without Tributing. Yugi activates the effect of "Rainbow Blessing" to Tribute the equipped "Kuriboh" and allow all other monsters he controls to attack directly this turn. "Swift Gaia" attacks directly (Gansley does not activate his Deck Master's ability at this point as it doesn't stop direct attacks) (Gansley 1800 → 0).