"Brothers in Arms, Part 1", known as "Noa vs. Seto - The Duel of Heaven and Earth's Creation" in the Japanese version, is the one hundred and fourteenth episode of the Yu-Gi-Oh! anime. It first aired in Japan on July 16, 2002 and in the United States on February 7, 2004. 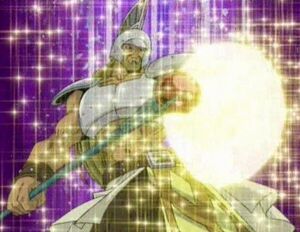 The effect of "Chiron the Mage" activates.

Turn 5: Seto
Seto draws. On Seto's Standby Phase, he activates the second effect of "Vampire Lord" to revive itself (2000/1500) in Attack Position as it was previously destroyed by an opponent's card effect. Seto then Normal Summons "Slate Warrior" (1900/400) in Attack Position. "Vampire Lord" attacks "Aeris", but Noah activates his face-down "Earthshaker" to pick DARK and WIND as the Attributes targets for "Earthshaker's" effect and force Seto to choose one of the picked Attributes. After Seto declares an Attribute, all monsters of that Attribute are immediately destroyed. Seto chooses DARK, so "Vampire Lord" is destroyed. "Slate Warrior" attacks and destroys "Aeris" (Noah 3300 → 3200).