"Clash in the Coliseum - Part 2", known as "The Three God-Summoning Knights" in the Japanese version, is the one hundred and thirtieth episode of the Yu-Gi-Oh! anime. It first aired in Japan on October 22, 2002 and in the United States on June 5, 2004. 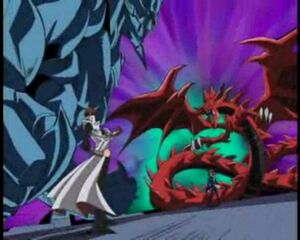 Now both players have an Egyptian God card on the field