With Kaiba's Battle City tournament completed, and the Alcatraz tower set to explode in less than an hour, Kaiba and Mokuba are still nowhere to be found. Yugi and the gang continue to search for them, but they are revealed to still be in the island's control room.

Kaiba thinks back to his duel against Yugi. Mokuba tells him the codes have been input and that they should both leave the island. Kaiba continues to have flashbacks to both his time in the Virtual World (which includes confronting Gozaburo Kaiba) and the time he spent at the orphanage with Mokuba. With just 13 minutes left before Alcatraz is destroyed, everyone is about to give up and go back to the Battle Ship when Duke and Bakura arrive. They tell the group the engine of KaibaCorp's blimp cannot be repaired. Joey freaks out, and is about to run to the ship when he sees a helicopter, the very same which should have taken him to a proper hospital while he was still sick.

Mai and Serenity go warn Ishizu, Marik, and Odion they are going to abandon the blimp in favor of the helicopter. The helicopter takes off with less than 1 minute to go, and the gang watches from the air as Alcatraz is destroyed by explosions. Suddenly out of the smoke the group sees a... "Blue-Eyes White Dragon"!! It is actually KaibaCorp's special Blue-Eyes jet, with Kaiba and Mokuba in the cockpit. After a brief exchange of words, Kaiba flies off in a different direction from the chopper.

Back on the mainland, Ishizu and Marik thank Yugi for helping to defeat Yami Marik. Marik tells Yugi that on the day Yugi visits Egypt he wishes to be his guide. The Ishtars then leave with Odion to go back home. Duke then has to leave to work on Dungeon Dice Monsters, but not before leaving Serenity his cell number. Mai then announces that since Battle City is over, she is growing restless. After Mai and Serenity exchange words of thanks between them, she tells Yugi she won't lose to him again before departing. 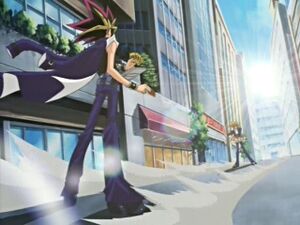 The next morning, Yami is preparing his deck when Yugi gives him a card: the "Red-Eyes Black Dragon", with a nod of approval from Yami. While sneaking out the door, Yugi is caught by his grandpa. When asked where he's going, Yugi simply states he has something to do. Grandpa says to be careful. Somewhere in the city, Yugi approaches a waiting Joey. With a few more flashbacks from Duelist Kingdom and Battle City, the episode ends with Yami Yugi and Joey facing off, ready to duel, with the sun rising behind Joey.