A New Evil - Part 1, known as "The Throb of a New Darkness" in the Japanese version, is the one-hundred and forty-fifth episode of the anime. It is also the first episode of the Waking the Dragons story arc.

With the events of Battle City behind him, Yugi Muto is set to access the Tablet of Lost Memories at Domino Museum—only to postpone it when a new enemy is discovered to have begun its assault on Earth.

An expedition in an unknown ocean deploys a submarine to enter what appears to be a submerged city. Amongst the team on this expedition is Professor Hawkins, amazed at the discovery. 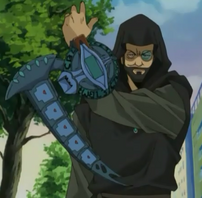 The robed man challenges Weevil and Rex to a Duel.

One day after the Battle City tournament, both Weevil Underwood and Rex Raptor run into each other. Having obviously heard of the Egyptian God Cards, they plan on getting their hands on them no matter what, oblivious to the fact that they couldn't use them anyway. While running down a hill street, they crash upon an enigmatic monk-like figure, who recognizes them. Things turn worse when the man announces that he has come to take their souls and commands them to Duel with him, displaying a never-before-seen model of Duel Disk.

The same afternoon, Yami Yugi rushes out of the high school building to try to open the door to his World of Memories. Joey, Tristan and Téa catch up with him, and they promise to remain friends. At the same time, elsewhere, a hooded man inside of an enigmatic temple is chanting a spell in an unknown language. (The language is never specified, but it sounds like Ancient Greek).

Yami and the others face the "Tablet of Lost Memories", and as Yami presents the God Cards, the Millennium Puzzle on the tablet responds. Meanwhile, the mysterious man chants in a quicker manner, and the echo of his voice can be heard inside of the museum as the tablet is covered in ice.

A shriek rings out in the street, and the group rushes out to see Duel Monsters swarming everywhere. They decide to try to consult Kaiba Corporation. While rushing there, they stumble upon both Weevil and Rex, who look strange and are muttering strange things like "it has begun... there's the sign..." and "soon this world shall swallowed by the great beast ..." 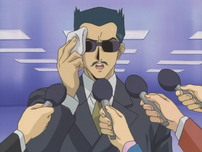 The group rushes into the KC building, which is swarmed with reporters and operators trying to handle all of the incoming calls. Kaiba's secretary and Battle City Referee, Roland, is nervously telling the media that they don't know why is this happening. He announces that the President of KaibaCorp will hold a press conference soon from the United States, before forcing the reporters outside.

Later that evening, Yami and the others are watching TV in Yugi's house. Solomon Muto is polishing the God Cards in the meantime. The TV reports more incidents of Duel Monsters appearing around the world. Yami wonders if trying to open the World of Memories provoked this. Seto Kaiba suddenly comes into view, making the appointed press conference. He claims that the root of the problem isn't within KaibaCorp, since they disabled the Duel Monster visualization system and the Duel Monsters continued to show up.

The group wonders what both Weevil and Rex were babbling about earlier when a sound comes from downstairs. Yugi rushes down there to find Solomon on the ground and the shop ransacked. Solomon tells Yugi that someone stole the God Cards. 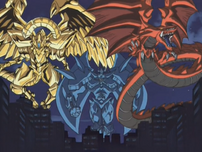 The Egyptian God cards materialize in the city.

Rushing outside, the group see the 3 Gods materializing in different parts of city. Yugi wonders who could be doing this, as one would need one of the Millennium Items to be able to Summon them. Suddenly, three bikes come into view and three persons riding on them display the same type of Duel Disk the monk sported. They each make a different announcement about themselves and their mysterious organization.

Yugi and Joey demand to know if they stole the God Cards. The second man picks "Obelisk" from his Duel Disk and hold it up. He admits to the theft and claims to know about the Nameless Pharaoh. They then challenge him to come to a building currently under construction if they want to retrieve the God Cards, and run off towards it.

The group reach the topmost floor, and are greeted by the same monk who faced Weevil and Rex. His name is Gurimo, and he claims to serve Rafael before he politely challenges Yami to a Duel. The 3 Swordsmen look on from a higher spot; it appears they set this up so as to test Yami's strength. The tallest among them states that if Yami Yugi falls here, then he isn't their enemy. The others add that they still needs the "souls" of both Joey and Kaiba. The blond man claims that by gathering their "souls", their scheme shall be completed.

Gurimo engages a strange Field Spell Card: "The Seal of Orichalcos". Yami Yugi thinks this is a "Shadow Game", and tries to use his Millennium Puzzle, which fails to deter the Seal. Gurimo claims that the Millennium Items are powerless inside of this area. Gurimo's monsters become "dark" and gain 500 ATK each. Yami Yugi manages to gain the upper hand by Summoning "Valkyrion the Magna Warrior", but Gurimo suddenly Summons "Obelisk the Tormentor" to Yami's shock. Apparently, this power allows him to control one of the Gods without the need of the Millennium Items.

Turn 1: Yami Yugi
Yami Yugi draws "Beta The Magnet Warrior" and subsequently Normal Summons it (1700/1600) in Defense Position. He then Sets a card.