"Legend of the Dragons", known as "Nameless Dragon, Timaeus" in the Japanese version, is the one-hundred and forty-seventh episode of the Yu-Gi-Oh! anime. It first aired in Japan on March 4, 2003 and in the United States on March 4, 2003.

With both Earth and the Duel Monsters Spirit World in danger due to the power of the Orichalcos, Duel Monster Spirits, including the Dark Magician Girl", appear to Yugi and Yami Yugi in a dream. Together, they unlock the "The Eye of Timaeus".

As the plane of the Three Swordsmen comes close to the island which was seen at the end of the previous episode, the cargo bay door opens and they all jump off aboard their bikes to race up the stairs. The plane flies away even though there's no-one in board.[Notes 1]

Meanwhile, Yugi Muto and the others are talking with Professor Arthur Hawkins, who has been researching some unknown undersea ruins believed to be around 10,000 years old. There are some engravings of Duel Monsters in there as well, suggesting they revered them. He also claims that the Duel Monsters are real beings, living in another world. Yami Yugi, as the Nameless Pharaoh, managed to seal the evil powers and avoid the destruction of the world by rampaging Duel Monsters. The evidence lies in all of the magic, tarot, rites and superstitions humanity has been building up, based off their meeting with the Duel Monsters.

Tristan laughs at this theory, and Rebecca stomps her right foot, angry at his rudeness. Tristan keeps on insisting that the incidents registered yesterday are due to someone manipulating the Solid Vision System, but Téa reminds him that Seto Kaiba himself announced that it wasn't the case.

Joey tells the Professor that he remembers what happened at the Battle City Semi-Final against Yami Marik. What he felt during that Duel and what happened to him as a result of the attack made by "The Winged Dragon of Ra" wasn't a Solid Vision at all. Thus, he agrees with he has just experienced. Téa adds that the fact that only the "chosen ones" can use the God Cards must be part of it, too.

Yugi gives the Professor the stone they picked from Gurimo last night. The Professor recognizes it as the same kind of stones which were inside of the ruins. He claims that he'll go back to the U.S. along with Rebecca to research more.

Once they go outside and Solomon escorts both of them to the airport in a taxi, Yugi suddenly hears a voice from inside of the Millennium Puzzle calling for help. No one else can hear it, it seems.

While trying to sleep, Yugi and Yami are going over what's happened, wondering what's going to happen next.

In the meanwhile, the mysterious Three Swordsmen of Doma are reporting to their enigmatic superior. He claims that the power of the Nameless Pharaoh is not to be ignored. Rafael hands him the 3 God Cards which he'd put inside of a wooden box. The man picks them up and recognizes their hidden power. He claims that they shouldn't just be used for the Nameless Pharaoh to recover his memories. Instead, they shall be employed as keys for the "forbidden door".

The man places each card inside of one stone snakes' mouth and calls upon a god, claiming that, by offering the power of the three God cards as a sacrifice to link "that land and this land". The energy of the Cards is transferred into the sky, creating an aurora-like effect.

Yugi has trouble sleeping and the voice calls out for him again. He's transported into Yami's "mind room" and they try to locate the owner of the voice. It's then than a Kuriboh appears and leads them into a strange city-like area where they see someone running off. Trying to follow it, both fall into another dimension: the world of Duel Monsters. 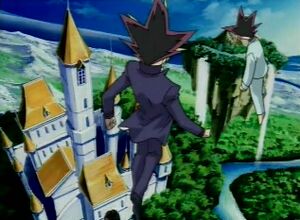 Upon entering the castle, they spot 3 gigantic dragons sealed in ice and each having a sword stabbed somewhere in their bodies. Dark Magician Girl appears and tells them of the 'Dark Sun' which is assimilating Duel Monsters. Only she and another few are left. She begs upon both Yugis to save both worlds, and tells them to unseal one of the "Nameless Dragons". Both do so, and they somehow realize the name of this dragon: Timaeus.

Awakening, Yugi is shocked to see an aurora in the sky. He runs off into the city's main plaza and reunites withs his pals. They all witness more Duel Monsters being absorbed into a strange mass of green crystal which gives way to the "Dark Sun", a gigantic eye. The mysterious commander of the Three Swordmen claims that Yami Yugi shall become a sacrifice for the resurrection of his God, so the 'Dark Sun' tries to pull Yugi in with a kind of wind spiral. Suddenly, Yugi's Deck shines and he takes out a Card depicting Timaeus. He calls upon its power and Timaeus manages to destroy the monster, making it shatter into several pieces which end up scattered around the world. The mysterious man seems to share some degree of pain from it and makes a grimace.

Dark Magician Girl appears in front of Yugi and claims that the 'Evil God' has hidden in the real world and it'll eventually be resurrected. She wishes of Yugi and Yami Yugi to defeat it and free her imprisoned comrades before she leaves.

The following Duel Monster Spirits appeared in this episode.