"A Duel with Dartz - Part 1", known as "To the Site of the Decisive Battle! Dartz vs. Yugi & Kaiba" in the Japanese version, is the one-hundred and seventy-seventh episode of the Yu-Gi-Oh! anime. It first aired in Japan on October 29, 2003 and in the United States on May 7, 2005.

Yami Yugi and Seto Kaiba are transported via helicopter to Dartz's castle. Dartz recalls his Orichalcos Soldiers from all over the world, as he intends to begin the final stages of his ritual to revive The Great Leviathan. Yami Yugi and Kaiba challenge him to a two-on-one Duel.

After the Duel between Yami Yugi and Rafael is over, the building they are on top of begins to shake and crumble. A KC Chopper arrives to rescue them, but Yami Yugi is unable to carry Rafael (who is still weakened from their previous Duel). Rafael falls into a chasm, but not before handing Yami Yugi an SD memory card. The whole building gives way to an ancient structure; the modern building was just an outer shell built around it. Yami Yugi hands Kaiba Rafael's SD memory card, and Kaiba uses a PDA to check it: it's a map, signalling the location of Dartz's temple. While flying away and after seeing a swarm of locusts fly across the skies, four military choppers intercept the KC Chopper and redirect it.

Duke Devlin and Rebecca Hawkins, driving across the city, stumble upon some Orichalcos Soldiers. Rebecca jumps out and tries to challenge them, but they ignore her and look towards the sky. Dartz chants a spell and they disappear into the air, being recalled from all over the world.

Meanwhile, Rafael can be seen emerging from the smoke at the base of the building, holding Mai's soulless body.

The choppers land on an aircraft carrier. The commander in charge explains that their country's politics are under the control of Doma and that they don't have the authorization to strike. Nevertheless, they offer to refuel the chopper and take them as close as possible to Dartz's island.

The KC Chopper has trouble making it through the typhoons and the storm that surrounds the island, but Dartz chants a spell to make a twister pull them closer. They land in front of the temple and disembark. They stumble upon the main chamber and feel like something lingers on the air, a kind of collective sadness. Discovering a passage, they find another room containing tablets depicting the imprisoned souls. Yami Yugi recognizes Yugi, so he rushes forward when Dartz's voice booms out.

Two torches form an arch of fire and from it Dartz emerges, claiming that he's waited for them and welcoming them to his temple. He claims, as always, that he will get his souls and the blessing of his God. He erases two tablets to set apart "special seats" for both Kaiba and Yami Yugi. Kaiba and Yami Yugi tell him that the Three Swordsmen have been defeated, so he's the only one left. Dartz looks unfazed. He had always planned to have them be sacrificed as well. Yami Yugi demands the release of the souls, and Dartz challenges them to try to defeat him. He makes the whole set of torches light, thus revealing the whole room. Yugi and company gasp; the floor, walls and dome-shaped ceiling are filled with tablets of sealed souls. Mokuba recognizes that some of them are from other eras, even. Dartz explains that he's existed for over 10,000 years. He then forms a Chaos Duel Disk and steps forward. Kaiba announces that he shall be his opponent, but Yami Yugi refuses to let him go solo. They decide to do a Tag-Team Duel, and Dartz agrees.

Elsewhere, Rafael picks up Valon's body and loads into a jeep along with Mai's. He mutters that there's something he still needs to do.

Both Yugi and Kaiba begin their turns by Summoning high-Level monsters: "Blue-Eyes White Dragon" and "Black Luster Soldier". Dartz begins with the "The Seal of Orichalcos" following this, he manifests his fighting spirit, which was so strong even the ones observing the duel felt it. He then Summons an "Orichalcos Gigas" and one back-row Monster: "Orichalcos Kyutora". In the next turn, both Yami Yugi and Kaiba work in unison to bring out "Master of Dragon Soldier" and Yami Yugi uses a Trap Card to inflict "piercing" damage to Dartz. However, their attack is somehow blocked by "Kyutora", and Dartz claims that it is not possible for them to defeat him. The energy of the attack provokes for the "Seal" to warp them into the World of Memories of the Orichalcos. Dartz then makes a speech about how everything is born from the Dark. They float over the Earth as they speak. They then descend below the clouds until they float atop a city: Atlantis. Dartz announces that he was the ruler of that city and the destroyer of it: it was a beautiful city, but, alas, it was walking upon the road of destruction.

Turn 2: Yami
Yami Yugi draws. He then activates "Black Luster Ritual" to Tribute "Valkyrion the Magna Warrior" from his Hand and Ritual Summon "Black Luster Soldier" (3000/2500) in Attack Position. Yami Yugi then Sets a Card (though this isn't mentioned in the dub).

Turn 3: Dartz
Dartz draws. He then activates "The Seal of Orichalcos". From now on, all of Dartz's Monsters will receive a 500 ATK boost and the loser(s) of this Duel will lose their soul(s). Dartz then Normal Summons "Orichalcos Gigas" (400 → 900/1500) in Defense Position. Dartz then pays 500 Life Points (Dartz 4000 → 3500) to Special Summon "Orichalcos Kyutora" (500 → 1000/500) from his Hand in Defense Position. Dartz places it in the Spell & Trap Card Zone, which means that it can't be attacked until Dartz's first-row Monsters are destroyed first. 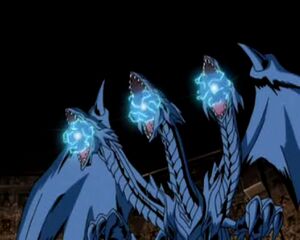 "Master of Dragon Soldier" as it prepares to attack

Yami Yugi draws "Polymerization" and subsequently activates it to fuse his "Black Luster Soldier" with Seto's "Blue-Eyes Ultimate Dragon" and Fusion Summon "Master of Dragon Soldier" (5000/5000) on Yami Yugi's side of the Field in Attack Position. Yami Yugi then activates his face-down "Meteorain" to grant all of his Monsters the ability to inflict Piercing damage this turn. "Master of Dragon Soldier" attacks & destroys Dartz's "Orichalcos Gigas", but due to the effect of "Orichalcos Kyutora", Dartz receives no battle damage.