Aknadin/"Shadow Magus": "It came. The holder of the White Dragon. Seto, you shall be granted the proof that you are the King."

Priest Seto: "Aknadin - sama! Even if thou are my father, I won't sell my soul to the Dark! Let's go, Kisara!" (starts to leave with Kisara)
Aknadin/"Shadow Magus": "Seto! It is not possible for you to run from our set Fates!"

Yami Bakura: "Unbelieveable! No! I'd rather say useless. I'd never consider that that Great Dark Priest fella could lose."
Yami Yugi: "With this, your ambition to turn Seto into your ally has been crushed."
Yami Bakura: "Don't be so quick to be delighted, Yugi. The Sandglass for the Evil Summon is still flowin'... And so is the countdown to death. After all, yer defeat was predictable thing."
Yami Yugi:(thinking) "The Great Evil God Zorc... When that sandglass finishes draining, the real terror will begin upon this world. A creature with terrifying powers... But even if Zorc is ressurected, there must be a method to defeat it. That's..."

Yami Bakura: "It'd seem ye've also realized it! The secret of Zorc's sealing..."
Yami Yugi: "If this is a Dark Game, all objects must have a way to be defeated. And, now, near to the end of this competition, there's just one thing which isn't know yet... And that's my name! 3,000 years ago I used my own soul to seal Zorc beyond the door of the Realm of the Dead. And this means that my name itself is the key to Zorc's sealing!"
Yami Bakura: "Unfortunately enough, ye don't know where is that name hidden at as of yet. However... To give ye a small glimmer of hope... Yer pals have snuck into yer royal grave, to search for the Pharaoh's true name."
Yami Yugi: "My pals are..."
Yami Bakura: "Only the hearts of those who have been accepted by ye can get into this world."
Yami Yugi: "Why are ya telling me this?"
Yami Bakura: "So that ye receive a big deal of damage due to desperation all of a sudden... At the instant in which yer pals find yer name, my servant will annihilate 'em."
Yami Yugi: "Your servant, did you lowlife say?"
Yami Bakura: "The great me used 'Parasite Mind' into one of yer companions. * smirks *"

"He who solves the Millennium Puzzle must return the wish he was granted. Only then the door shall be opened." 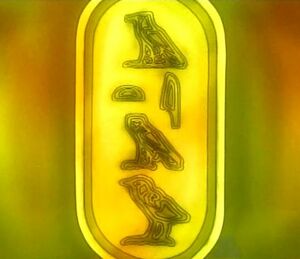 The Cartouche of Pharaoh Atem's Name

The Identity of the Pharaoh's Name![edit]

The following monsters appeared in this episode. Monsters in italics debuted here.